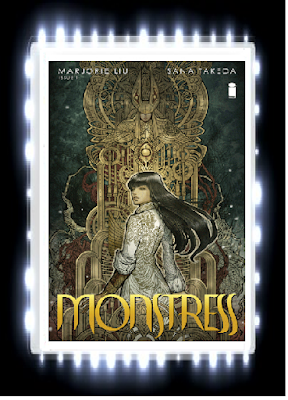 Introduction:
Now I will admit that I had never read any of Marjorie Liu’s comic books before, even though most of them were highly praised.  So, when I heard that Marjorie Liu was creating a new comic book series called “Monstress” and I had heard a lot of good things about this series, I just had to check this series out!

The story starts off with Maika being sold to a witch named Sophia and it turns out that this was a part of plan that Maika conjured up when she was at her homeland to get inside the witches’ strong hold in order to find out what happened to her mother.  It also turns out that Maika possesses a dangerous power where she is psychically linked to a monster of tremendous power and she is prone to have beastly urges whenever she is in danger.  Now, not only does Maika have to control her dangerous powers, but she must survive the horrors of the war between the humans and the supernatural forces!

Marjorie Liu’s writing: Wow!  For a first time reader of Marjorie Liu’s works, I must say that I was quite impressed with Marjorie Liu’s beautiful writing of this issue!  I loved the way that Marjorie Liu wrote the world that the characters live in as it seems like Ancient China with some supernatural touches to the universe that really made this world so mesmerizing to read about.  I also loved the way that Marjorie Liu wrote Maika’s character as Maika is shown as being a strong female protagonist who suffers a horrific injury as she loses her arm in the war and yet is still determined enough to sneak into the witches’ strong hold to find out the truth about her mother.  I also think that the beastly aspect of Maika’s character really made her interesting and I would love to see where they take her character in the next issue!

Sana Takeda’s artwork:  Sana Takeda’s artwork is just simply beautiful to look at!  I just loved the way that Sana Takeda made the characters’ hairs glow throughout the pages, especially with Maika’s long and raven hair glowing at various places of her head.  I also loved the way that Sana Takeda drew the steampunk aesthetics to the story as we see many machines and rusted pipes throughout the artwork and it really gives the story a dark and gritty futuristic feel.

For anyone who does not like strong language, there were a couple of utterings of the “f” word throughout the story that might offend some people.  Some readers might want to skim through the curse words if they get offended by them.

Overall, “Monstress Volume One: Awakening Part One” is a truly fantastic introduction to Marjorie Liu’s “Monstress” series and I definitely cannot wait to check out the next few issues of this series!