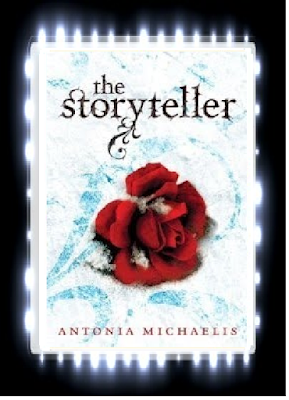 “Go away princess. Leave your outlaw alone. You won't change him... go away, Anna, far away, and don't ever come back. The fairy tale doesn't have a happy ending.”


Okay…I am seriously at a loss of words in how to describe my feelings for this book…I mean seriously; I had never, EVER read a book that turned out quite like this!  Alright, so before I go into details about my thoughts about this book, this book is called “The Storyteller” by Antonia Michaelis and was translated from German by Miriam Debbage and I have to say that this was one of the most shocking and heartbreaking romance novels I had ever read!

Anna Leeman was your average high school student who dreamt of exploring more in her life than just studying and hanging out with her inner circle of friends all the time.  One day, however, Anna’s life changes when she finds a child’s doll on the floor of the student lounge and finds out that it belongs to Abel Tannatek, the school’s Polish peddler drug dealer.  Anna then becomes fascinated with this drug dealing loner and wanted to learn more about him by following him everywhere.  When Anna follows Abel to his home, she discovers that Abel is living with his six-year-old sister Micha and he has been trying to take care of her, despite the fact that he is too young to be her guardian.  Anna then begins to help Abel avoid the social services who want to take Micha away from him and during that time, she ends up falling in love with Abel.  Unfortunately, at the same time, several people, who have close connections to Abel and Micha, ended up getting murdered and Abel is the prime suspect!

Can Anna prove Abel’s innocence or is Abel not as innocent as he looks?

Whoa…just whoa….This was one of those books that I could not decide on how to voice my opinions on the whole experience because this book has things that are so wrong that you should find yourself hating this book for how certain things turned out; but at the same time, it was one book that really kept you on the edge of your seat and you just found yourself wanting more from the characters and the story itself!  I mean, who would have thought that I would be reading a romance novel that has murder in the center of the plot and pulls off quite a plot twist that I did not see coming a mile away?   Antonia Michaelis has truly woven an extremely intense and tragic tale about the joys and dangers of having a romantic relationship with a mysterious bad boy.  What made this book stand out from the other romance novels was the fact that it was deconstructing the ideal bad boy hero archetype that we often see in romance novels and actually turned this aspect into something disturbing and tragic for the main anti-hero of the story. Antonia Michaelis really made the characters stand out in this book as they were each deconstructions of the typical romantic archetypes found in most romance novels.  Anna Leeman, the heroine of the story, is shown to be innocent and yet yearns for more adventure in her life.  However, she is shown to be less unsure of what she really wants and due to being extremely young, she does not know the dangers of the real world very well. Abel Tannatek is shown as your typical bad boy hero who is mysterious and is often moody towards people; but he is shown to have an extremely dark and dangerous side that might put his relationship with Anna in jeopardy.  Bertil is shown as a jealous boy who expresses great hatred towards Abel due to him being a romantic rival for Anna, but it is shown that his distrust towards Abel may be founded for a reason.  Gitta is shown to be Anna’s best friend, but she is rarely there for Anna, especially when Anna starts distancing herself from Gitta throughout the story.  But probably my most favorite part of this book was the storytelling segments told by Abel regarding the little queen and her dangerous journey to the mainland!  I loved the way that Antonia Michaelis made the storytelling segments relate to the real life struggles of Abel and Micha as it helps give the readers clues as to what is really going on with Abel and Micha’s life and also pointing out that just because the story that Abel is telling is a fairy tale, does not mean that everything that happens in real life will wrap up nicely like in most fairy tales.

There are some disturbing and troubling scenes in this book, but probably the most prominent for me was the scene where Abel rapes Anna.  Even though this was the point in the book where we start to see Abel’s true nature, it was still unsettling for me to see a rape scene in this book since I do not take well to rape scenes.  But what troubles me more about this scene was how Anna took it as even though we still see Anna reeling over from Abel raping her, the fact that she still loved him even after he raped her makes me feel uneasy.  I guess if I was in that situation (and I really, REALLY hope I never do get in that situation), I would not be as forgiving as Anna.

Overall, “The Storyteller” is easily one of the most disturbing yet most heartbreaking and shocking novels I had ever read and anyone who loves reading about books that deconstruct the romance genre should definitely give this book a try!