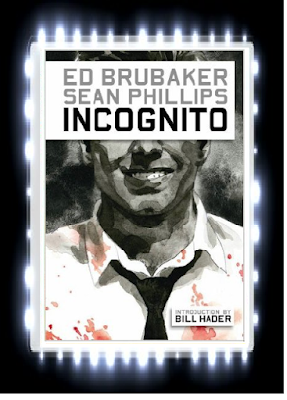 Alright! Another graphic novel that has the famous Ed Brubaker and Sean Phillips collaboration touch (the first being “Fatale”).  This time, I’m checking out a graphic novel that is quite unique called “Incognito” and man, was it one of the most creative and unusual graphic novels I have ever read!

Zack Overkill was your average man who was working at a business job that he hated and employees that he could care less for.  Surprisingly, it turned out that Zack Overkill was once a former villain who left destruction in his wake and because of this, Zack is put into a Witness Protection Program and if he gets out of line, he will be looking at a life in jail.  Unfortunately, when Zack’s past associates come and pay him a visit, Zack will soon realize that there is more to him than he originally thought.

Ed Brubaker’s writing: Wow! I was quite amazed at Ed Brubaker’s writing in this unique graphic novel!  Now, I have read a couple of graphic novels where we look at everything from the villain’s point of view, but I had never read a graphic novel where a villain is forced to give up his life of crime and work in an ordinary job in order to protect his identity from the public.
Ed Brubaker did a great job at developing Zack Overkill’s character as Zack is shown to be a rude and miserable character who does not like his normal life and would rather be going out and fighting criminals or get his hands on some drugs to keep him sane.  It was also interesting seeing how Zack still has murderous intentions towards various people who annoy him as it shows that he still has some villainy inside of him, even though he is slowly going through a character progression throughout the story.  I also loved the way that Ed Brubaker unraveled the mystery behind Zack Overkill as I found myself being shocked at Zack’s true backstory and how it affected him as a character throughout the story.

Sean Phillips’ artwork:  Sean Phillips’ artwork is as usual gorgeous to look at as all the characters are drawn realistically and the violent scenes are extremely detailed that they make me cringe with tension.  I also loved the film noir style of the artwork as it made me feel like I am back in the 1940s and experiencing the mysteries and terror going on during that decade.

The reason why I took off half a point from the rating is because there were times where the plot got a bit confusing because the story went back and forth between giving us snippets of Zack’s past life as a villain and unraveling the mysteries that surround his true identity.  I often found myself trying to figure out what was really going on with Zack and where the story was taking me when they tried to mention his backstory.  Also, for anyone who does not like strong language and violence, this volume contains loads of strong language and some violent scenes of people being shot violently or being beaten up in a graphic manner.

Overall, “Incognito Volume 1” is a great read for anyone who wants to read about crime noir and villains turning into everyday citizens to save themselves from going to jail.  I am definitely looking forward to reading the second volume of this series!