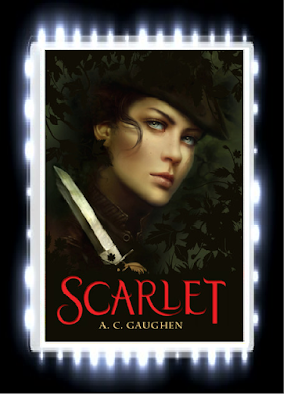 You know what?  I never would have thought that I would find an alternative story to the popular “Robin Hood” tale.  I mean, I have seen many different versions of “Robin Hood” being played out on television and movies and yet, A.C. Gaughen’s “Scarlet” still remains to be one of the most original retellings of “Robin Hood” I had ever read!

Wow!  Now, I will admit that I was a little hesitant about reading this book at first because I was not sure what to expect from this book and I did not know that it was a retelling of “Robin Hood.”  So, after I read this book, I was pleasantly surprised by the outcome of this book and how it retold the story of “Robin Hood” to feature a more capable and heroic female protagonist!  A.C. Gaughen did a fantastic job at retelling this story of Robin Hood and his band of thieves by featuring a strong female protagonist in Will Scarlet and the love triangle between her, Robin Hood and John Little.  It was great seeing Will Scarlet fighting against her enemies by using her knives to stab them and the action sequences where Robin Hood and his band of thieves fight off the Sheriff’s men were well written and literally had me sitting on the edge of my seat to see if Robin Hood and his band thieves were able to defeat the Sheriff’s men!  I also loved the way that A.C. Gaughen wrote each character, especially Will Scarlet and John Little.  I loved the fact that Will Scarlet is capable of taking care of herself when it comes to fighting since it shows that she is not your stereotypical damsel in distress and I also loved the fact that she speaks her mind about what she truly wants in life instead of letting people make the decisions for her. I also loved the character of John Little as he is shown to be a bit flirtatious with Scarlet, but he also has a heart of gold and is willing to protect everyone in the band of thieves at the cost of his own life.

The reason why I took off half a point from the rating is because I felt that the romance in this book was a little annoying to sit through.  I usually do not do well with love triangles in books because they are often done poorly and they make you wish that you were not rooting for anyone to hook up in the story.  I got a bit fed up with Scarlet not making up her mind about whether or not she wants to spend her life with John Little or with Robin Hood as she spent the majority of the book going back and forth on who she wants to be with.  Also, I was a bit put off by how Robin Hood was portrayed in this story as it seemed like he was too moody and he did not have that cheerful personality he usually does in other adaptations and I wanted his character to be fleshed out a bit more than just being a moody character who does not know how to show his feelings for Scarlet.

Overall, “Scarlet” is a truly interesting read for anyone who wants to read a creative retelling of “Robin Hood” with a strong female protagonist!