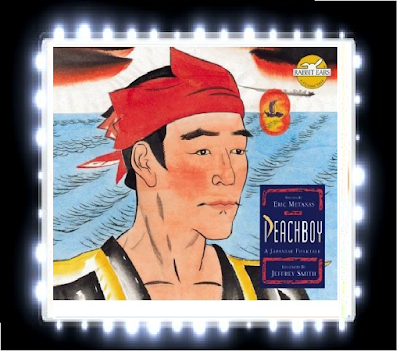 “Peachboy” is one of the classics from Rabbit Ears’ “We All Have Tales” series and is probably the most dramatic and heartwarming story out of the whole series since “East of the Sun West of the Moon.”  With Sigourney Weaver’s tender narration, along with Ryuichi Sakamoto’s mesmerizing music and Jeffrey Smith’s beautiful illustrations, “Peachboy” is an instant classic that cannot be beat!

Sigourney Weaver’s narration is so tender and soothing that she helps reinforce the intensity of this story, especially during the scenes of the emotional loss for the parents who lost their children to the ogres.  Ryuichi Sakamoto’s music brilliantly captures the Japanese influence of the story making this story dramatic.  Jeffrey Smith’s illustrations are beautiful as they brilliantly capture the essence of the Japanese characters.  The image that probably stood out the most would be the image of Momotaro himself as he has a small and distinguished looking mustache and wears a traditional green Japanese outfit with a red belt that makes him look more heroic.

Parents should know that the scene with the ogres might be a little scary to younger children.  The ogres are drawn so realistically that smaller children will definitely be frightened and what will frighten children even more is the fact that these ogres had kidnapped many of the village’s children when they were young.  This part of the story might scare young children as they will probably think that the ogres will kidnapped them at the middle of the night and parents should explain to their children that this is merely a fairy tale and that most of the creatures in this book (except the dog, pheasant and ape) are imaginary.

“Peachboy” is a fantastic tale from Japan about the true power of friendship and courage and children will easily watch this video over and over again.  I would recommend this video to children ages five and up since the scenes with the ogres might be too scary for smaller children.