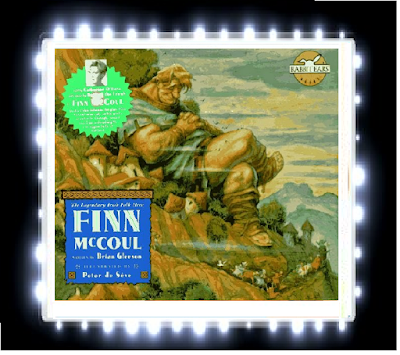 “Finn McCoul” is an Irish folktale from the creative company Rabbit Ears Productions and is about how Finn McCoul must face his nemesis Cuculin and only his wife, Una, knows how to handle the giant brute.  “Finn McCoul” is a great tale about true cunning that many children will enjoy for many years.

When Finn McCoul was born, he was no bigger than a fire-breathing dragon, which was too small for a giant.  King Coul, Finn’s father, was so displeased at the size of his son that he throws Finn over the castle wall and into the water. Luckily, King Coul’s mother sees Finn in the water and she saves him from drowning and she decides to raise the boy herself in the woods.  Many years later, Finn grows up into a man and he decided to leave his grandmother to become a great hero.  Eventually, Finn finds a giant woman named Una who was extremely beautiful and they got married and lived on top of a mountain in a castle.

However, the reason why Finn made his home on top of the mountain was because it was the only way to avoid Cuculin.  Cuculin was a fearsome giant who once flatten a thunderbolt into a pancake and he would always show it to his foes to remind them of the beating they are about to receive from him.  Cuculin tried to find Finn McCoul, but Finn would always run away from him before battle.  One day, Finn was helping his friends build the causeway from Ireland to Scotland when he started gnawing on his thumb.   Whenever Finn starts gnawing on his thumb, he immediately sees the future and he found out that Cuculin was coming after him and he decided to go straight home to Una.  When Finn got home, he told Una about Cuculin and she tells Finn that she needs time to think about how to deal with Cuculin.

What is Una’s plan and can Finn defeat Cuculin?

Catherine O’Hara does a splendid job narrating this story especially as she uses an Irish accent so effectively to narrate this heroic Irish tale.  Boys of the Lough’s music is beautiful and truly captures the true spirit of Irish music as the tunes are cheerful and old fashioned.  Peter deSeve’s illustrations are beautiful and hilarious at the same time, especially during the scenes of Cuculin lifting up Finn’s house to make the wind move away from the house as he was instructed by Una to do so.

“Finn McCoul” is a wonderful tale from Ireland about how it is wise to be cunning whenever a bully threatens you and it will be an instant classic for children who love comedy and folktales.  I would recommend this book to children ages five and up since there are some Irish names that might be too hard for smaller children to pronounce such as “Cuculin” and “Una.”