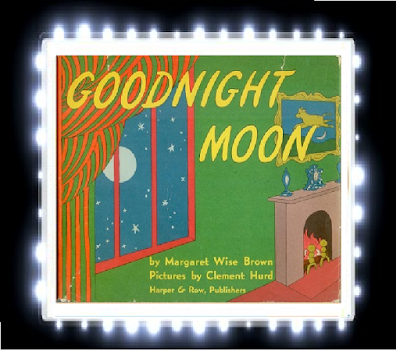 Series: Over the Moon #2

“Goodnight Moon” is a classic bedtime story by Margaret Wise Brown along with illustrations by Clement Hurd and it is basically about a small rabbit is saying goodnight to all the objects and pets in his room.  “Goodnight Moon” is a true cult hit for children of all ages.

Margaret Wise Brown’s story is extremely cute and heartwarming as the little rabbit not only says goodnight to everything he spots in his room, but also states to the audience about the various things that he spots, similar to how the child has to find certain objects or people in the “Where’s Waldo” and “I Spy” books.  Clement Hurd’s illustrations are beautiful and creative as he makes the small rabbit’s room brightly colored as the walls are green and the carpet is red, giving the room a Christmas feel to it.  Also, Clement Hurd’s illustrations are highly creative as he makes some images such as the image of the three bears in a painting, colored in black and white while the images of the rabbit in his room are full of color.  Also, towards the end of the book, Clement Hurd makes the room look darker as the small rabbit is saying goodnight to all the objects in his room and is about to go to sleep.

“Goodnight Moon” is a true classic for children who love bedtime stories and spotting various objects in a picture.  I would recommend this book to children ages two and up since the book is extremely easy to read through and there is nothing inappropriate about the content in this book.