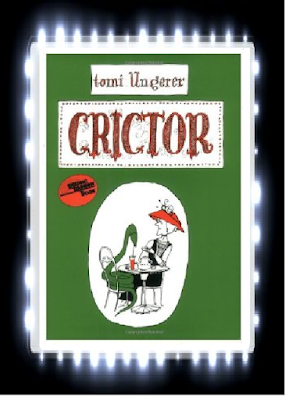 I have read many books by Tomi Ungerer and I have just recently stumbled upon this book called “Crictor.”  “Crictor” is a French story by Tomi Ungerer and it is about how an old friendly woman named Madame Louise Bodot gets a boa constrictor for a pet and the two of them become the best of friends.  “Crictor” is the perfect story of true friendship that will be an instant favorite for children for many years!

A long time ago in France, there live an old lady named Madame Louise Bodot and she had a son who was in Africa, studying reptiles.  One morning, Madame Bodot received a package and when she opened it, she found a boa constrictor!  At first she was frightened by the boa constrictor, but then she started to care for the boa constrictor and called it Crictor.  Madame Bodot did everything with Crictor, including going out shopping together, Crictor staying in Madame Bodot’s class and talk walks through snow together.  One night however, a burglar snuck into Madame Bodot’s house and tied her up and…

Of all the books I have read from Tomi Ungerer, this one was the most subtle and heartwarming and subtle book I have ever read!  Tomi Ungerer has done an excellent job at both illustrating and writing this heartwarming book about the true power of friendship!  Tomi Ungerer has truly woven a great story about an unlikely story between a woman and a boa constrictor and I loved the way that Madame Bodot and Crictor became fast friends despite the fact that they are different species and I loved the way that they have been there for each other whenever things get tough.  What I really loved about this book was that Crictor the boa constrictor is shown as being a kind-hearted and resourceful snake who is willing to help everyone in need, since I have always read many books where snakes were shown as the villains of the story, so this was a breath of fresh air for me.  Tomi Ungerer’s illustrations are very simplistic, as there are only green, black, white and red coloring (which is basically only four colors used in the whole book), but they are extremely cute, especially of the image of Crictor itself as it is long, green and has innocent looking eyes. I really loved the images of Crictor helping out everyone in the neighborhood as it is able to bend its body in several different ways, such as spelling out the alphabet for the school kids, to help people.

All in all, “Crictor” is simply a wonderful and heartwarming story about the power of friendship that many children will definitely love for many years!  I would recommend this book to children ages five and up since the scene where Madame Bodot is attacked by the burglar might scare smaller children.