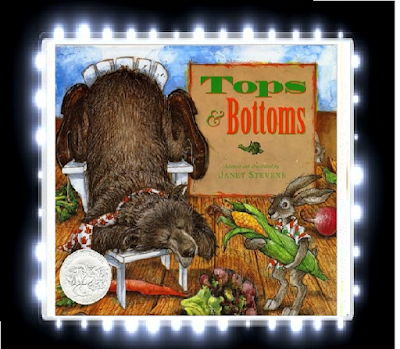 I have been reading many stories that were inspired by Uncle Remus’ “Brer Rabbit” stories for many years, but I have never come across a story quite like this one!  “Tops and Bottoms” is a Caldecott Honor Book that is written and illustrated beautifully by Janet Stevens and it is a trickster tale that is inspired by many European folktales and African-American folktales of the South that deal with the subject of a trickster character teaching their rivals a lesson in hard work and determination!

In this tale, Bear was rich as he has lots of land due to inheriting it from his father.  Unfortunately, Bear was extremely lazy and he would spend his days sleeping away on the porch of his house.  His neighbor Hare however, was poor as he was forced to give up his land due to losing a bet to Tortoise and he and his family were in an extremely poor state.  It was then that Hare and his wife, Mrs. Hare decided to come up with a plan to take some of Bear’s wealth to make their lives easier.  So, Hare decided to propose to Bear to become business partners and Hare will plant the harvest for each season, while Bear can take a nap during the harvesting.  All that Hare asks for in return is for Bear to choose which side he wants from the vegetables he grows in the garden: the tops or the bottoms?

Will Hare and his family outwit Bear?

Once again, Janet Stevens had created another book that really got my folktale senses tingling!  I loved the way that Janet Stevens based this story on the classic “Brer Rabbit” stories as Hare is shown getting what he wants by tricking Bear out of his crop by using his wits, which is extremely prevalent in the “Brer Rabbit” stories.  I really enjoyed the tone of this book as it is lighthearted and clever and I thought it was hilarious when Hare and his family tricked Bear out of his crop as it also teaches readers that being lazy all the time will not help you succeed in life.  Janet Stevens’ illustrations as usual are beautifully done as the characters look gorgeous, especially the images of Bear and Hare as they look shaggy yet realistic.  I also loved the fact that this book is set up as being read from literally “top to bottom” as it really fits the title of this story!

Overall, “Tops and Bottoms” is a truly brilliant book for anyone who is a huge fan of folktales that deal with characters who are tricksters and it would be a great treat for children and adults everywhere!  I would recommend this book to children ages four and up since the book is pretty easy for younger children to read (unless they get confused about reading the book from top to bottom).