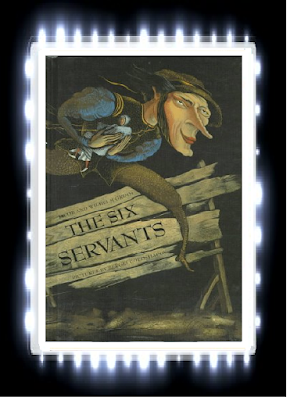 I have been reading the Brothers Grimm’s stories for years now and I was surprised that I found a picture book that adapted the obscure tale of “The Six Servants.”  Judging by the artwork on the cover by Sergei Goloshapov, you will seriously be treated to one heck of a nightmarish journey through the land of fairy tales in this book!

In this story, a young prince hears about a queen who has a beautiful daughter and the only way that any man will marry the queen’s daughter is if they complete the three tasks that the queen sets for them.  Unfortunately, none of the other suitors were able to complete the tasks set by the queen and they ended up being beheaded for their troubles.  So, the young prince decided to take a journey towards the cruel queen’s palace in order to marry the princess and along the way, he meets six strange men who all possess unique abilities such as one servant being able to eat everything twice his size and another man whose gaze can shatter anything it touches.  But as soon as the prince and his servants make it to the queen’s palace, the queen decides to give the prince three impossible tasks to fulfill before he marries the princess.

Can the prince and his servants complete the queen’s difficult tasks?

This was a truly fantastic book from the Brothers Grimm about the power of trust and courage and I loved the way that there was plenty of drama and fantasy in this story as they made it really interesting to me!  I especially loved the scenes where the servants showed off their unique abilities such as the fat man eating all of the oxen and wine in the queen’s cellar in one gulp and the tall man stretching himself out to get to the Red Sea to retrieve the queen’s lost ring.  This story strongly reminded me of the Russian folktale “The Fool of the World and the Flying Ship” (except a little darker in tone) as both stories involved the main character meeting up with several strange people who all possess special abilities that help out the main character with the tasks given to him by a royal figure who is bent on making sure that the main character does not marry their daughters.  I really loved the fact that this story has so many ties to “The Fool of the World and the Flying Ship” since I am a huge fan of “The Fool of the World and the Flying Ship” and I have always enjoyed reading folktales and fairy tales that are similar in tone and style to that story.  Sergei Goloshapov’s artwork is both surreal and haunting to look at as the characters are drawn in exaggerated styles, especially the image of the man that can see across the world and has an extremely long neck that seems to look wobbly from the reader’s point of view.

Parents should know that this book has some nightmarish imagery as the artwork can be a little too dark and surreal for some small children to handle.  There are some scenes in this book that can cause nightmares for some smaller children, such as the scene at the beginning of the book where we see several stick figures in the background being hung in the gallows after the text describes about the queen chopping off the heads of the would be suitors who did not complete her tasks.  Parents might want to read over this book first to make sure their children can handle the dark themes shown throughout this book.

Overall, “The Six Servants” is a fantastic book for anyone who is a huge fan of the Brothers Grimm’s works and loves reading books that are dark and imaginative.  I would strongly recommend this book to children ages six and up since some of the imagery and content in this book might be extremely disturbing for smaller children.