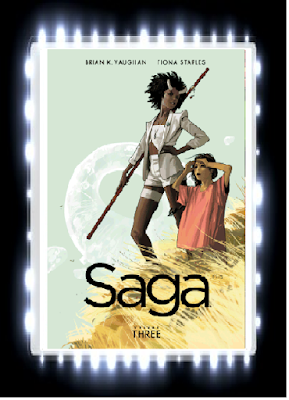 I finally got around to reading the third volume in Brian K. Vaughan’s FANTASTIC, AMAZING and UPLIFTING “Saga” series and man was this volume just as exciting and emotional as the previous two volumes (and that is saying something)!

After the events of the second volume, Marko, his mother and Alana ended up on the planet Quietus in order to meet the romance author D. Oswald Heist, who was responsible for writing the romance novel that both Alana and Marko enjoyed, while inspiring them to become a couple.  Unfortunately, the couple is still being pursued by the bounty hunter The Will who now has a new ally in Marko’s ex-fiancé Gwendolyn and the slave girl Sophie that The Will rescued in the previous volumes.  Meanwhile, two news reporters are trying to find out more about Alana’s disappearance from her home planet while uncovering secrets about Alana’s past.

Brian K. Vaughan’s writing: Seriously, how does this series just keep getting better and better?  Brian K. Vaughan seriously has the magic touch when it comes to writing this series as the characters just continue to be more interesting as the story goes on and the stakes are raised even higher for both Alana and Marko as they try to escape from the wars of their planets, but their pursuers become even more deadlier than before.  Even though this volume does focus on Marko and Alana’s relationship with each other, I loved the fact that this volume focuses even more on The Will’s growing relationship with Gwendolyn and towards Sophie, the little girl.  It shows a more human side to the Will and it also shows that Gwendolyn is more than just Marko’s psychotic ex-fiancé! I also loved Alana and Marko’s relationship with D. Oswald Heist as it shows that D. Oswald Heist is quite a wise man who knows that the love shared between Alana and Marko is strong enough to get through any turmoil that is face by the war and I loved the fact that he was supportive of that love.  I really loved the way that Brian K. Vaughan established the relationships between the characters as they felt so authentic and I actually felt so much emotion for these characters and the situations that they get involved in.

Fiona Staples’ artwork:  Fiona Staples’ artwork is as usual, beautifully done as the characters look realistic and the landscapes on the alien planets looked so gorgeous.  I loved the way that Fiona Staples drew the scenes of The Will, Gwendolyn and Sophie going on a planet that is full of forests and fields as these scenes are drawn in a lavish way and I loved seeing the relaxed expressions on the characters’ faces whenever they are staying on that planet since it made those scenes much more effective to look at.

Overall, “Saga: Volume Three” is definitely one volume you should pick up!  It is full of drama, action, and romance that will satisfy many comic book fans for many years!