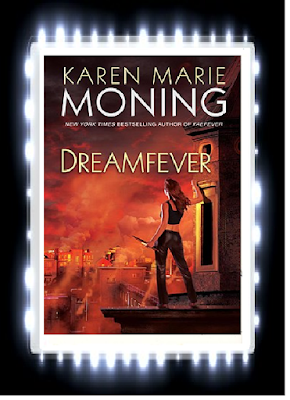 Remember when I said that “Faefever” is probably the darkest book in Karen Marie Moning’s famous “Fever” series?  Well, I think that the fourth book in the “Fever” series, “Dreamfever” managed to beat “Faefever” in the darkness category by a mere mile with its tragic twists for the characters!

After MacKayla Lane gets brutally taken advantage of by the Lord Master in the last book, she is more determined than ever to bring her sister Alina’s murderer to justice and save the world as the walls between the Fae world and the human world came crashing down on Halloween night!  Not only that, but MacKayla will soon discover that her feelings for Jericho Barrons has increased after Halloween night and yet, she cannot bring herself to trust him at all.  The same goes for V’lane, the Fae Prince, who also wants to keep MacKayla in his clutches, causing MacKayla to also not trust him.  But when the Lord Master finally takes things in his own hands and the people that MacKayla truly cares about are in great danger, MacKayla has to put aside her personal feelings for both Jericho and V’lane, while discovering more dark secrets about the war against the Fae!

Wow! This series just continues to amaze me as we read through MacKayla’s journey in trying to save the world from the Fae while trying to figure out who she should trust in this frightening world.   Karen Marie Moning has done a fantastic job at writing this fourth installment in the “Fever” series as the stakes are raised higher for MacKayla and it was fantastic seeing MacKayla grow as a character as she used her wits and strategizing skills to gain allies in the most unlikely of people.  It was also tragic seeing MacKayla realize that the world she was so comfortable in (the world where she was just a regular woman who loves to shop and spending time with her parents) was slowly crumbling before her very eyes due to the Faes invading Earth and causing mayhem on the world.  I actually felt sympathy for MacKayla as I would have been upset about being yanked out of my comfort zone without warning and being faced with the reality of the world (which is something I have to go through quite often in real life).  I also loved the way that Karen Marie Moning wrote MacKayla’s relationship with Dani as they have a sisterly bond with each other and it was great seeing MacKayla do everything in her power to protect Dani from the evil forces of the Fae while Dani does the same for her.  It was also interesting seeing how MacKayla’s relationship with Jericho Barrons and V’lane continues to grow, even though she still does not trust either of them and she still argues with them at any given time.  I do however like the fact that MacKayla is discovering more secrets about both V’lane and Jericho as it makes the wait to figure out their past lives less agonizing than ever before.  I was happy to learn a bit more about Jericho’s dark past through MacKayla’s new talent in reading people’s minds and now I am more interested in the irresistible yet aggressive bad boy Jericho Barrons!  As for the sex scenes in this book…oh…my…goodness!  Things were really sizzling between Jericho and MacKayla in this book and I just pray that they get over their distrust of each other and get together already (unless, V’lane has something to say about that)!

For anyone who does not like strong language and mild sexual content, this book does have stronger language than was shown in the previous volumes (especially now that MacKayla just outright says the curse words rather than replace them with more “flowery” terms like “kiss my petunia”).  Also, there are a couple of sex scenes in this book, so anyone who does not like sex scenes might want to skim over these scenes.

Overall, “Dreamfever” is definitely one intense novel that fans will enjoy and also throw their hands up in the air in frustration due to the book ending on a huge cliffhanger (hmmm…why does that sound familiar…oh yeah! The same thing happened in “Faefever” with that irritating cliffhanger!) Now because of this book ending on a cliffhanger, I’m going to check out the final book in the “Fever” series, “Shadowfever!”