[BOOK REVIEW] The Amazing Spider-Man: Origin of the Hobgoblin by Roger Stern 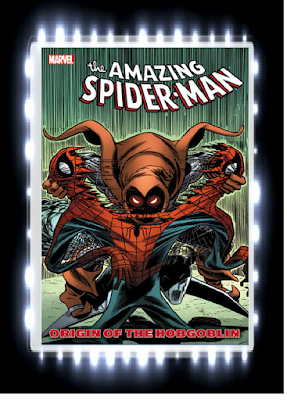 Title: The Amazing Spider-Man:  Origin of the Hobgoblin

Roger Stern, Bill Mantlo and Tom DeFalco’s writing: I have to admit that when I first went into this graphic novel, I thought that I would never understand what was going on in this series since this was the first time I had ever read a “Spider-Man” comic.  However, not only was the writing by Roger Stern, Bill Mantlo and Tom DeFalco extremely interesting to read through, but the story was easy enough to get into since all the writers took great care in explaining to the readers about what happened in previous events and how they all tie into the current storylines.  What I loved about Roger Stern’s interpretation of Spider-Man/Peter Parker is how Peter Parker is portrayed as being good-natured and intelligent and I really enjoyed the scenes where Peter Parker is shown working on a new type of technology, such as his Spider Tracer which works like a tracking device, that could help him defeat his enemies much easier.  I also loved the way that Spider-Man is portrayed as being a wisecracking superhero while at the same time is extremely aware of the situations going on around him, which makes him a well-rounded character.  The mystery surrounding the identity of the Hobgoblin was done extremely well as readers will be sitting on the edge of their seats trying to figure out who the Hobgoblin really is and how he knew about Norman Osborn’s notes on being the Green Goblin.  I also loved the way that the Hobgoblin was not being written as just being a copy of the Green Goblin, but proved to be an extremely difficult opponent for Spider-Man for he was extremely intelligent and used Norman Osborn’s notes to his advantage.

Since this comic came out during the early 80s, I knew that I was going to be reading a ton of dialogue coming from the characters.  This graphic novel actually took me two days to finish because the dialogues with each character, especially Spider-Man, were extremely lengthy.  Even though I enjoyed reading the characters’ inner thoughts on a situation, I found it a bit difficult to get through this graphic novel in one day because it took so long to read through the dialogues.  Also, another reason I gave this volume a four star rating was because the first two stories at the beginning which dealt with Roderick Kingsley felt a bit out of place for this volume since they barely dealt with Hobgoblin.

Overall, even though this volume was extremely lengthy and some stories felt out of place, “The Amazing Spider-Man: Origin of the Hobgoblin” is a great introduction to the Hobgoblin and “Spider-Man” fans will definitely enjoy this volume!