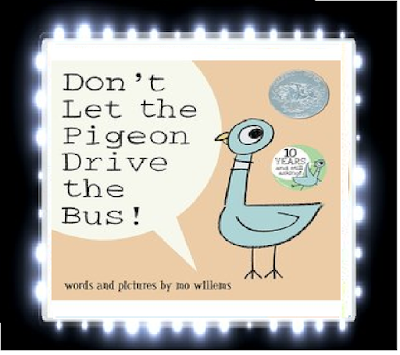 I have read many books by Mo Willems that have been honored with the Caldecott Honor award, which included the “Knuffle Bunny” series.  Now I have recently read “Don’t Let the Pigeon Drive the Bus!” which is actually Mo Willems’ first children’s book and is a Caldecott Honor book and it is about how the Pigeon keeps asking the audience if he could drive the bus after the bus driver leaves to run an errand.  “Don’t Let the Pigeon Drive the Bus!” is truly a memorable book that children can read over and over again!

Wow!  I never would have thought that a book a pigeon just asking the audience if he can drive the bus throughout the book would be so interesting to read!  Mo Willems has done an awesome job at both illustrating and writing this book about the pigeon asking everyone if he could drive the bus.  What I found so interesting about this book was the fact that the only illustrations shown in this book were mainly of a blue pigeon and a bus driver in a grey and green uniform who only shows up at the beginning and end of the book, but Mo Williems did a great job at making this book extremely hilarious by giving out different expressions for the pigeon which ranges from excitement to anger.  Mo Williem’s writing is extremely simple yet witty at the same time as it goes to show that you do not have to have long sentences to make a great book!  What I really loved about Mo Williems’ writing is the dialogue that the Pigeon is given as it is hilarious and witty to listen to and my favorite quotes from the pigeon were, “Pigeon at the Wheel!” and “No? I never get to do anything!”

All in all, “Don’t Let the Pigeon Drive the Bus!” is truly one unique and hilarious children’s book that every child who love witty humor will definitely get a kick out of it! I would recommend this book to children ages three and up since there is nothing inappropriate in this book and the format is simple enough for small children to understand.