[BOOK REVIEW] Edwina, the Dinosaur Who Didn't Know She Was Extinct by Mo Willems 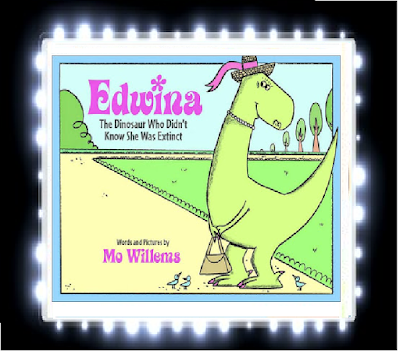 Title:  Edwina, the Dinosaur Who Didn't Know She Was Extinct

When I first read “Knuffle Bunny,” I thought to myself that I would probably never read another book with so much sarcastic humor.  Well, I was wrong when I recently picked up this book called “Edwina the Dinosaur Who Didn’t Know She Was Extinct” which is also written by Mo Willems and when I read this book, it was so hilarious and cute!  This book is basically about a dinosaur named Edwina who was well liked in her neighborhood except by a kid named Reginald Von Hoobie-Doobie, who tries to think of ways to prove that Edwina is extinct.  This book clearly has the pure essence of comedy that you would rarely find in picture books!

Mo Willems has done it again in his talent of producing pure comedy and cute illustrations in the world of children’s books.  Mo Willems has done an excellent job at writing this book as it is full of humor, especially during the scenes where Reginald tried to prove to everyone that dinosaurs are extinct and the hilarity that ensues when people kept on ignoring Reginald’s protests.  Mo Willems has done a great job at making Edwina a truly loveable character as she would help anyone out in their time of need, especially Reginald who tries everything to make her life miserable.  Mo Willems’ illustrations are truly hilarious and cute as he draws Edwina as a large yet motherly looking dinosaur who has pink toenails and fingernails, a pearl necklace and a straw brimmed hat that makes her look like she is actually apart of the society that she is in.

“Edwina the Dinosaur Who Didn’t Know She Was Extinct” is the perfect book for children who love pure comedy and love reading books about dinosaurs.  I would recommend this book to children ages four and up since there is nothing inappropriate in this book.