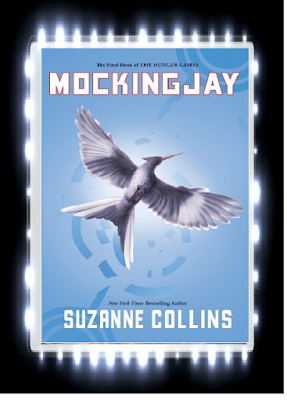 “My Name is Katniss Everdeen.  Why Am I Not Dead?  I Should be Dead.”

After reading Suzanne Collins’ previous books “The Hunger Games” and “Catching Fire,” I wanted to check out the final book in the “Hunger Games” series called “Mocking jay” and man, was it just as intense and horrifying as the previous two books!

After Katniss Everdeen survived the last Hunger Games in “Catching Fire,” she discovers that the Capitol had destroyed her home District 12 as a way to teach Katniss that she cannot defy the Capitol.  Katniss and her family then escape to the legendary hidden district, District 13 to seek refuge, only to find out that District 13 is planning a revolt against the Capitol!  Now Katniss realizes that she was apart of a major plan to overthrow the Capitol, even though she never knew about it in the first place and now the future of Panem rests on her shoulders as she has to decide on whether or not she should become the Mocking jay that will defy the Capitol!

Wow!  I was absolutely blown away by how this final installment in the “Hunger Games” was much DARKER, MORE GRUESOME and MORE EMOTIONAL than the previous books!  Suzanne Collins has definitely done a great job at building up tension throughout this book as I was seriously on the edge of my seat trying to see if Katniss would be able to fulfill her destiny as the Mocking jay!  I loved the way that Suzanne Collins gives us a good insight inside Katniss’ mind about how she has doubts about being the Mocking jay and how it will affect her relationship with her family and friends.  I also loved seeing the developing relationships she has with both Gale and Peeta and it was interesting seeing how she was willing to put her life on the line to protect her friends and families from the Capitol’s evil influence.  I also loved the way that Suzanne Collins wrote Katniss as a strong heroine who is not only good at fighting, but is extremely intelligent as she tries to think through her problems before acting on them and I think that is a good characteristic that helps Katniss survive through the revolution against the Capitol.  I also loved Peeta’s character and I was actually worried for Peeta throughout this book after the Capitol kidnapped him in the last book and did horrible things to his mind.

The reason why I gave this book a four star rating is because of the constant love triangle between Gale, Katniss and Peeta.  I usually do not do well with love triangles because of the fact that the character in the middle has to spend the majority of the book deciding whether or not he or she wants to spend the rest of their life with whoever they choose.  I felt that this aspect of the story sort of took away from the constant action and suspense of the last two books and sometimes, it was hard getting through this book without gritting my teeth in impatience with Katniss choosing who she wants to be with.  Another problem that some readers might have with this book is that it has more bloody and sad scenes than the last two books as there are many characters that are killed off in the most gruesome ways in this book.  Since this final book deals with war and its consequences, it might be a bit difficult to get through this book without being sadden by the turn of events in this book.  Anyone who is planning on reading this book better be prepared for a DARK RIDE ahead of them!

Overall, even though “Mocking jay” was not the best of the “Hunger Games” series, it is still a great read for “Hunger Games” fans and the ending will definitely blow you away once you pick up this book!