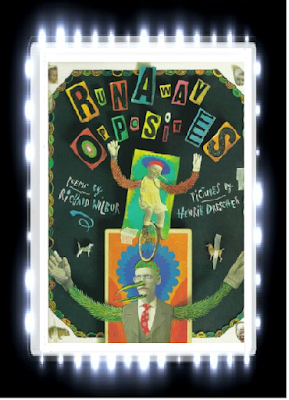 When I was browsing through the library for more books by Henrik Drescher, I stumbled upon this extremely unique little book! “Runaway Opposites” is an odd children's book with poems by Richard Wilbur along with illustrations by Henrik Drescher and this book basically have poems that detail various opposite words presented in a wacky way. “Runaway Opposites” is truly a unique book that every child should read!

Alright, here is a little information about illustrator Henrik Drescher’s involvement with previous books about poetry.

This is not the first book about poems that Henrik Drescher illustrated as he first collaborated with Jack Prelutsky with the book "Poems of A. Nonny Mouse" which also featured poems about wacky characters.

Alright now that I have explained a bit about the illustrator, I would like to talk about what I loved about this book! Richard Wilbur’s writing is a wacky as Henrik Drescher’s illustrations and together they perfectly complement the wackiness of this book of poems! I loved the way that Richard Wilbur allows you to think outside the box whenever you are trying to figure out which words are being compared as opposites to each other, such as in this poem:

“What is the opposite of nuts?
It’s soup! Let’s have no ifs or buts.
In any suitable repast
The soup comes first, the nuts come last.
Or that is what sane folks advise;
You’re nuts if you think otherwise.”

So in this poem, the opposite of nuts can either be soup or sane, which proves how crazy the poems really are and how far you have to think outside the box to figure out what words Richard Wilbur is trying to compare together. Henrik Drescher’s illustrations are even crazier in this book than in any other book he has created! The illustrations are filled with bizarre creatures that override the pages such as images of humans with bird beaks and creatures that have many limbs attached to their bodies. I also loved the way that Henrik Drescher pasted cut out photos of realistic looking faces on his illustrations and then he draws wacky expressions on the realistic photos such as drawing a beak on a realistic photo of a human and this tactic truly makes the illustrations seem to jump out at you.

Parents should know that this book might be a bit difficult for younger children to get through. What I mean is that, as was said in another review I have read about this book, the text looks like something that you would read out of “RANSOM” notes, meaning that it looks likes pieces of letters were cut out of magazines and pasted together to create words to tell the poetry. Yeah, it sounds pretty creative, but when you actually try to read it, the words seem jumbled and you cannot read out what the sentence is trying to say. Another problem that parents might have with this book is the images. Now, I am a huge fan of surreal art and I did think that these images are extremely creative, but I will admit that there were some images in this book that did scared me out a bit. Here is a list of some of the images that scared me out a little bit:

In the poem about the opposite of doctor, there is an image of a green man who has tentacles sprouting from his face and each tentacle has some kind of green ooze leaking out of them (some of the green ooze also lands on the green man’s tongue!)

In the poem about the opposite of a weeping tree, there is an image of a large wild beast that is multicolored and when it is laughing, it has sharp teeth and its mouth looks like it is nearly cleaved in two.

Overall, “Runaway Opposites” is definitely an odd poetic book that every child should definitely check out! I would recommend this book to children ages six and up due to the text being difficult for smaller children to read and because some of the images might scare smaller children.