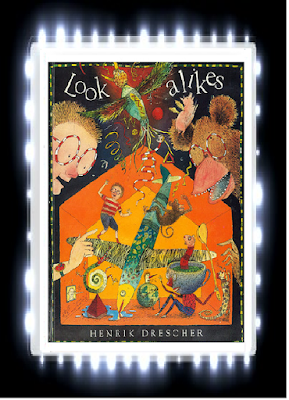 Alright, you have read “Alice in Wonderland” and “Coraline” before and both stories involve a character going to a strange world that is different from their own world. Well, if you had read any of Henrik Drescher’s books, then you already think that his illustrations are out of this world! “Look-alikes” is a children’s book by Henrik Drescher that literally takes two characters out into another world as Rudy and his pet monkey Buster go into a world called “Look-alikes!” “Look-alikes” is a great book that children will read over and over again!

Wow, what a strange and unusual book I have just read and I thought that "Simon's Book" was surreal! That is just what I love about Henrik Drescher’s work and I just really love this little gem of a book! Henrik Drescher done an excellent job at both writing and illustrating this book about imaginative adventures and I loved the way that this book was written in a simplistic yet creative manner since the writing mainly contained exclamations from Rudy and Buster such as “Help!” and “Yikes!” and I loved how the story started off as a normal narrative when we are introduced to the Pearson family and how the writing becomes somewhat disconnected when Rudy and Buster’s look-alikes come into their crazy world. Henrik Drescher also did an excellent job at illustrating this book, which I am just so into his surreal illustrations, and I loved the way that Buster and Rudy both have similar red and white striped glasses even though Rudy is a human boy and Buster is a brown monkey and it just made them look like a pair of friends that are inseparable. But my most favorite part of the illustrations were the images of the strange creatures that Rudy and Buster’s look-alike encounter when they enter the strange world within the clubhouse and some of the creatures that stayed with me for a long time when I read this book was one creature that has two faces and has fountain pens for feet and another creature that was half goldfish and half ostrich when Rudy and Buster’s look-alikes were trending through the water. I also loved the way that Henrik Drescher made Rudy and Buster’s actual world so calm and beautiful looking while in the world of the look-alikes, the world is chaotic and wild.

The only problem with this book is that the plot might be a bit confusing to younger children there is not really a particular plot to the story as it is mainly about two toys’ adventures in a secret clubhouse. Also, younger children might not understand about the whole story within a story scenario that this story has as there is an outside story which features Rudy and Buster enjoying their family time in the real world and an inside story where Rudy and Buster’s look-alike toys enter another world and have wild adventures there. Parents might want to explain to their children that the book was trying to promote the benefits of imagination within children and how it is wonderful to be creative with your imaginations.

Overall, “Look-alikes” is a truly memorable book for children who love surreal worlds and surreal characters and just love using their imaginations to create the worlds they want to be in! I would recommend this book to children ages five and up since the plot might be a bit confusing for smaller children and some of the images might either scare or interest your child, depending on what your child enjoys reading.