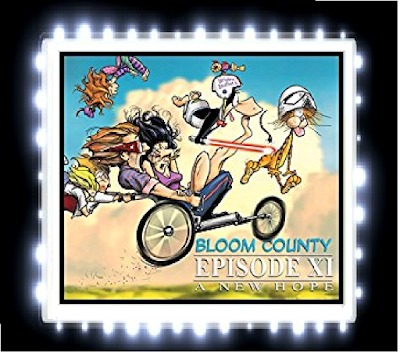 I would like to thank NetGalley and IDW Publishing for providing me a copy of this book in exchange for an honest review.

Now, I will admit that I had never read the “Bloom County” comics before, even though I had heard of the series way back in the 1990s.  I guess it was because that by the time I started reading newspaper comics, “Bloom County” had all but vanished from the strips and I was not able to read the series then.  So, imagine my surprise when I found out that a) the author of the “Bloom County” comics Berkeley Breathed, had decided to bring this comic series back to the pages in his newest comic book called “Bloom County Episode XI: A New Hope” and b) NetGalley has given out this book for readers to check out!

After twenty-five years of the “Bloom County” comic strips going out of the pages, the Bloom County gang has finally come back with new adventures and are trying to get used to all the new technology, such as social media and dealing with all the political drama in this modern-day world!

Berkeley Breathed’s writing:  Wow!  I never would have thought that there would be a day where I would actually read Berkeley Breathed’s legendary comic strip “Bloom County” and now that day has finally come!  Berkeley Breathed has done a brilliant job at writing this comic book series as the humor is sharp and witty and I really enjoyed the way that the satire on the modern-day era is handled in this series as I found myself laughing at each jab at the current state of politics.  Now, I will admit that I do not normally read many books or comic books that deal with politics because most of them tend to be a bit too one-sided for my tastes.  However, Berkeley Breathed was able to make the political satires in this comic be more hilarious and memorable as it managed to poke fun at both liberals and conservatives and that really amused me!  I really liked the fact that the comic is written in a way where you do not have to read the previous “Bloom County” comics to get the characters or the setting.  The fact that the characters felt the same way as they did decades ago except for the fact that society has changed over time, really made reading this comic a pleasant experience for me!  I also loved the way that Berkeley Breathed wrote each character, especially Bill the Cat and Steve Dallas as all the characters were hilarious and entertaining to read and I especially enjoyed their interactions with each other, especially with how Steve usually acts like a jerk towards the other characters, but is still on friendly terms with them.

For anyone who does not like language and sexual dialogue, this comic strip does have some language such as the constant usage of the “a” word and also there are some sexual dialogue littered throughout the comic, mainly coming from Steve Dallas himself as most of his story arcs involve him trying to get a date with various women.