[BOOK REVIEW] The Girl Who Spun Gold by Virginia Hamilton 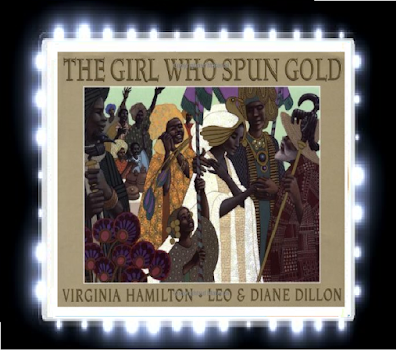 Title:  The Girl Who Spun Gold

Virginia Hamilton has done an excellent job at retelling this popular Brothers Grimm tale in a West Indian dialect, which greatly reflects the West Indian influence of this tale.  Virginia Hamilton makes this story extremely intense as Quashiba goes through so much tension with both the King and Lit’mahn, who both threatened her with imprisonment if she does not do what they tell her to do.  Even though Quashiba goes through so much turmoil, she is portrayed as a humble woman who tries her best to get through the horrible situations she is put through.  Virginia Hamilton also does a great job at portraying Lit’mahn as a cocky and frightening character as he threatened to turn the queen into a small person and make her live with him and even the characters in this book are frightened of him as Virginia Hamilton effectively describes in detail about the mischief that Lit’mahn causes in a frightening manner.  As usual, Leo and Diane Dillon’s illustrations are beautiful, but this time, their illustrations look much more realistic than in any other of their books.  Leo and Diane Dillon have done an excellent job at drawing Lit’mahn as a truly frightening figure as he has sharp teeth, evil looking eyes, pointy eyes, a wooden leg and a long and pointed tail.  Leo and Diane Dillon have also done a great job at capturing the style of West India as the characters are dressed in lavish robes and the background images of the forest clearly create the beautiful world that Quashiba lives in.

Parents should know that the king starts mistreating Quashiba after he marries her and even this incident happens in other variants of the classic Brothers Grimm tale, children might be upset at the idea of the king mistreating Quashiba after they are married and children might think that the king does not really love Quashiba at all, even though the reason why the king married Quashiba in the first place was because he thought she could spin thread into gold and that is the wrong reason to marry anyone just because they can make a person rich.