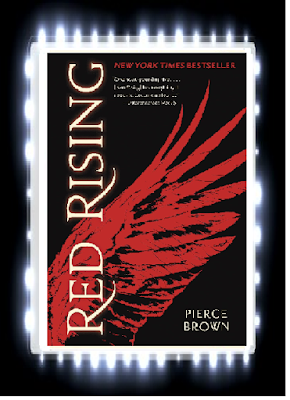 "I live for the dream that my children will be born free," she says. "That they will be what they like. That they will own the land their father gave them."

Eo kisses my cheek. "Then you must live for more."

I have read many books that were similar to “The Hunger Games” and they all had the same setup as the main character has to take down an oppressive government to save their people from a life of ruin. But, Pierce Brown’s book “Red Rising” proved to be something quite unique in the Dystopian future genre!

Darrow was known as a Red, who are a group of people that are set at the lowest caste in their society and they are constantly shown to be mining away in the caves to make the surface of Mars a place for everyone to live in.  Darrow was also married to a young and beautiful woman named Eo who made his life worth living for.  One day however, Eo shows Darrow a forbidden forest that they were not allowed to go into and it was there that she explains to Darrow that he needs to save their people from the oppressive government controlled by the Golds.  Even though Darrow did not want to go through with starting a rebellion, he soon changes his mind when his beloved wife Eo ends up being executed due to them breaking the laws, which included Eo defiantly singing a forbidden song in front of the Arch Governor Augustus.  It was then that Darrow decided to sneak into the Gold Institute by disguising himself as Gold and as soon as he gets into the Gold society, he is immediately thrown into a violent game where the Proctors will determine who the strongest Gold member in the game is and who will become Primus in this game.  Now, Darrow has to use his wits and strength to survive this savage game in order to take over the Gold society and save his people from a life of hardship.

Wow!  I have to tell you that Pierce Brown has most certainly written a truly unique Dystopian future book of the century!  Now, even though I have read plenty of young adult books that has a setting where the characters have to fight an oppressive government to save their people, this book was unique as it took place on Mars and yet, the society that the characters lived in resembles ancient Rome where the characters are forced to participate in violent games where only the strongest will survive.  Pierce Brown has done an excellent job at making this world unique as I was impressed with some of the phrases being said in this book such as “ghostCloaks,” nanoCams,” and “Gas Giants” and it made the book seem authentic in what kind of phrases would be said if humans lived on Mars or another planet.  I also loved the way that Pierce Brown wrote each character in this book as they were truly interesting characters and I like the fact that we get to learn each character’s backstory as it made me get attached to these characters and their goals in life. Probably my most favorite character in this book was none other than Darrow himself as I loved the character progression that he goes through in this book.  It was interesting seeing Darrow go from being unsure of himself in regards to whether or not he can make Eo’s dream come true to eventually commanding his own army to rise up against the Government, which made him into a character I truly root for!  I also loved the characters Mustang and Sevro as they were extremely interesting characters as you truly do not know whether or not they are loyal to Darrow and when you think that they are either betraying Darrow or stay on Darrow’s side, they would pull up surprises that the reader would never suspect!

Anyone who does not like strong language and violence might feel a bit uncomfortable with the fact that there is some strong language in this book, including the “p” word and the “f” word being dropped a few times.  Also, the violence in this book is pretty gory, especially with many scenes of people having their throats or their stomachs sliced by various weapons used in the story.

Overall, “Red Rising” is a truly fantastic book that would make the Dystopian genre proud and I will definitely be looking forward to reading the second book in the “Red Rising” series, “Golden Son!”