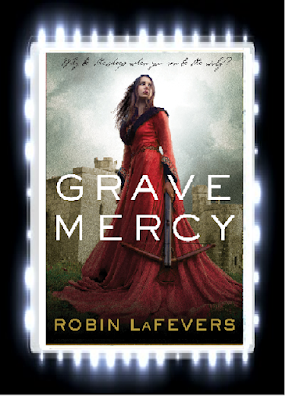 Now, I have read many historical romances during my time reading various romance novels, but I rarely read romance novels that deal with war and assassins all in one package!  “Grave Mercy,” the first book in Robin LaFevers’ “His Fair Assassin” series, is seriously one action packed and intense story that I immediately fell in love with!

When Ismae was seventeen years old, she was forced into an arranged marriage by her father to the brutal Guillo, who would constantly beat her to death.  Ismae then thought that there would be no way to escape this horrible life until a handmaiden from the convent of St. Mortain told her about the convent and that she could live there to escape her life of misery with Guillo.  Ismae then goes off to live in the convent for many years and was taught the ways of following St. Mortain the God of Death’s will which included learning how to be an assassin and using different kinds of poisons to kill their victims.  One day, the abbess of the convent sends Ismae on a secret mission to the high court of Brittany to seek out the traitor amidst the Duchess’ company and it is there that Ismae meets the mysterious duke Gavriel Duval, who is regarded with suspicion at every turn.  Even though Ismae is trying to do St. Mortain’s will throughout her mission, will her love for Duval blind her from her faith in St. Mortain and the convent?

Wow! I am quite impressed with how exciting and intense this book was!  Now, many of my book friends have been telling me forever to check this book out and when I finally did, I was not disappointed!  Robin LaFevers’ writing is truly beautiful and mesmerizing as the story is written in an ancient manner that really captures the society of 1485 Brittany and it felt like I was experiencing this culture through the writing itself!  I also loved the fact that Robin LaFevers was writing this story from Ismae’s point of view as we get to see the world of Brittany through her eyes and hear her thoughts on what she thought about her beliefs in St. Mortain and her growing love for Duval.  Ismae is an extremely fantastic heroine as I was quite impressed with her assassin skills and I also loved the fact that she is a cunning character as she easily figures out what is going on in the high court of Brittany and tries to come up with many strategies to protect the Duchess from any harm.  I also loved the fact that we get to see Ismae struggle with her faith in St. Mortain and her love for Duval as it made her character even more complex and I was wondering throughout the entire book about who will Ismae choose: her faith in St. Mortain or her love for Duval?  I just loved Duval!  I will admit that at first I found his character to be a bit obnoxious at the beginning, especially with how he was treating Ismae, but as the story progresses, we start to see more dimensions to Duval’s character as he proves to be a caring character who cares about his family and Ismae eventually and those personality quirks just made me love his character!   I also loved the bantering between Ismae and Duval as it was hilarious as well as heartwarming and I always believed that these two were just made for each other!

For anyone who does not like graphic battle sequences, this book does have some scenes where people are killed in gruesome ways which includes getting shot in the head by an arrow and getting cut up by a sword and that might be unsettling for some people.

Overall, “Grave Mercy” is one book that you should definitely check out if you are a fan of lady assassins!  Now, I am off to read the rest of Robin LaFevers’ “His Fair Assassin” series!