[BOOK REVIEW] My Laughable Life with Garfield by Jim Davis 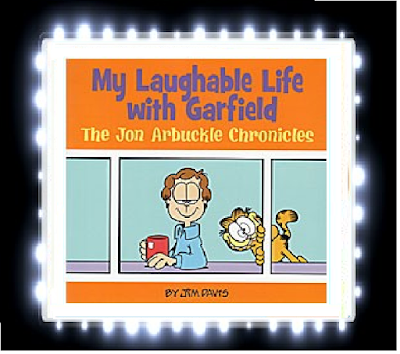 Title:  My Laughable Life with Garfield

For years, I have been reading comic books all about Garfield (well, he is the star of these comics)! But today is the first time I had ever read a “Garfield” comic book that does not center entirely on Garfield (although Garfield does appear in all of these strips) and that is “My Laughable Life with Garfield!”  This comic book is basically all about Garfield’s unlucky and dorky owner, Jon Arbuckle and how he eventually become a popular character in his own right in the “Garfield” comic strips and I have enjoyed every single comic strip in this volume!

This volume basically not only contains all of the comic strips of Jon Arbuckle’s adventures with Garfield, but also detailing his background stories about living on the farm with is family, his dating disasters (until Liz showed up anyway) and his constant wardrobe malfunctions!

Jim Davis’ writing: Jim Davis’ writing continues to be hilarious and witty throughout each comic book made of Garfield and this volume is definitely no exception to the rule!  I loved the fact that Jim Davis finally put together a volume that concentrated solely on Jon Arbuckle, since he is another popular character from the “Garfield” comics (well, Jon Arbuckle does appear in almost every “Garfield” comic strip, so that comes with a territory)!  I loved the way that Jim Davis detailed Jon Arbuckle’s life from dealing with Garfield, his former life on the family farm and eventually dating Garfield’s veterinarian, Liz.  The stories in this volume really gave Jon Arbuckle more depth to his character, especially when he originally started off as a guy who could not get a date because of his dorky personality to eventually getting a girlfriend in Liz, who was able to patiently deal with his dorky nature and I really loved that aspect of the series.  All the comics in this volume were just as hilarious as they were in any “Garfield” comic I had read and it was a treat seeing all the comics from the 1970s through the 2010s come together in one volume!  I also loved the little information tidbits on the side pages that describes about Jon Arbuckle’s life and his transition to the character he has become such as detailing his life on the farm and his several failed attempts at dating women.

Jim Davis’ artwork:  Jim Davis’ artwork is as usual hilarious to look at, especially of Jon Arbuckle and Garfield having large and rounded eyes.  It was also interesting in seeing how Garfield and Jon started out when they were introduced in the 1970s as their designs were much more different as they looked simpler and Garfield had a larger shape than he does recently.

Overall, “My Laughable Life with Garfield” is a brilliant volume for anyone who is a huge fan of Jon Arbuckle and would love to learn more about his life with Garfield and his dating life!