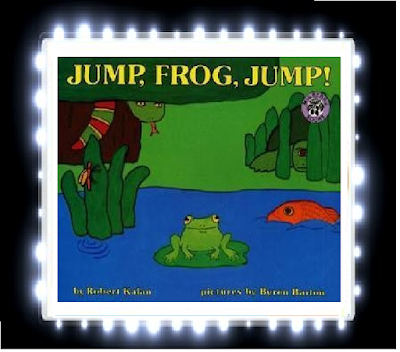 “Jump, Frog, Jump” is a lyrical children’s book written by Robert Kalan along with illustrations by Byron Barton and it is about how a small frog tries to avoid all the dangerous animals who all want it for their dinner. The food chain theme may be a bit too upsetting for smaller children to handle, but older children would most definitely enjoy this lyrical book about the food chain and a smart frog.

Robert Kalan’s writing is highly creative and lyrical as he writes the explanation of the food chain in a lyrical prose and he effectively uses the phrase, “JUMP, FROG, JUMP!” every time a threat comes to the frog and it must jump away from the threat in order for it to stay alive. Byron Barton’s illustrations are colorful and simplistic as he makes the animals who threatened the frog looking menacing and sometimes scary, especially of the image of the turtle hiding behind the bushes looking viciously at the frog. I also love the way that Byron Barton illustrates the flowers and the bushes in green and red colors, making them look extremely beautiful.

“Jump, Frog, Jump” is one of the greatest books about the natural order food chain for children as it is put in a lyrical format that young children would find simple to read. I would recommend this book to children ages four and up since the writing format is extremely simple for small children to read, but parents may need to explain the food chain in the animal world to them first before they read this book to their children.