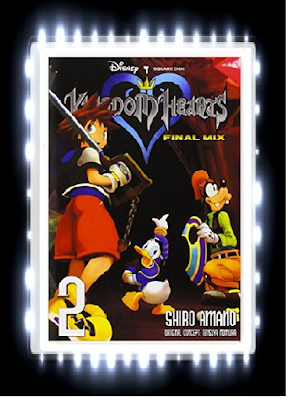 In this volume, Sora and his new friends Donald and Goofy continue to search for King Mickey and Riku and they ended up going to more new worlds!  They meet up with Pinocchio and his father in the belly of Monstro the Whale, end up in Atlantica and meet Ariel, go to Neverland and meet Peter Pan and ended up in Hollow Bastion while meeting the Beast!  Also, Sora will soon discover that his best friend, Riku might have turned to the dark side and Sora will have to find a way to bring Riku back to normal, while defeating the heartless!

Shiro Amano has done it again with the stellar writing and the hilarious and dramatic artwork for this story!  I loved the fact that this manga series remains faithful to the video game it was based off of as the characters act exactly the way they did in the games (except a little sillier in some places) and the situations from the games play out so brilliantly in manga format!  I loved the fact that we get the mystery surrounding the heartless solved in this volume and after I discovered the true purpose of the heartless and the person who was responsible for creating the heartless, I was truly taken aback and I started enjoying the story even more then!  Shiro Amano’s artwork is truly hilarious and dramatic at the same time as the Disney characters are drawn extremely well! I really loved the artwork of the characters from Neverland and Atlantica, especially the images of Ariel and Tinkerbell as they are the cutest looking characters in this book!  I also loved the way that Shiro Amano drew the dramatic scenes of Sora and his friends trying to fight the Heartless as the scenes look truly intense and at times frightening!