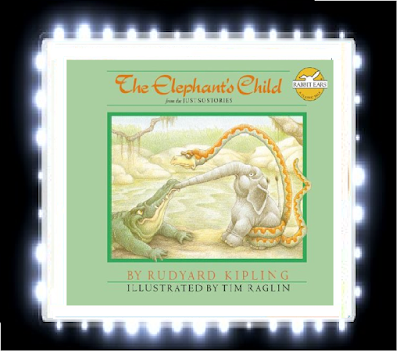 “The Elephant’s Child” is the first “Just so” story introduced in the Rabbit Ears Storybook Classics series and is easily one of Rabbit Ears’ finest videos since it won a Grammy Award in the late 80s. Jack Nicholson’s silky narration, along with Bobby McFerrin’s harmonic music and Tim Raglin’s colorful illustrations makes “The Elephant’s Child” a worthwhile treat for the whole family to enjoy.

Parents should know that there is quite a bit of violence on this video, mainly of the Elephant’s Child being spanked throughout the video. There is also a bit of violence when the Elephant’s Child encounters the crocodile, but you probably can guess what is going to happen without me spoiling the ending for you. Parents should reassure their children that violence is not always the answer to solve your problems and you should not spank your child just because he or she is curious about the world. Just try to explain to your child about the trials of the world in terms simple enough for your child to understand.

The Elephant’s Child” is a great piece of work from Rabbit Ears Productions and it surely has enough humor and action that will satisfy any child for many years to come. I would recommend this video to children ages eight and up due to some advanced vocabulary that younger children might not understand and some violence that might worry some small children.