[BOOK REVIEW] Joseph Had a Little Overcoat by Simms Taback 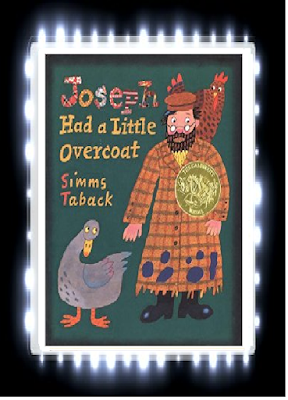 Title:  Joseph Had a Little Overcoat

Since this book is told in a folk verse, I will just recite part of the verse:

“Joseph had a little overcoat.  It was old and worn.  So he made a jacket out of it and went to the fair.

Joseph had a little jacket.  It got old and worn.  So he made a vest out of it and danced at his nephew’s wedding.”

Wow! This book was so amazing that I had to read this book so many times!  Simms Taback has done a great job at both illustrating and writing this book as both the folk verse and the illustrations are creative at the same time!  Simms Taback’s retelling of this classic Yiddish folk song is creative and inventive as every time Joseph has old clothing, he turns it into something new, which shows what a resourceful and creative character he is.  I really loved the message of this book as it convinces readers that you can always make something new out of something old, which also shows children the importance of preserving old items to use for good use.  Simms Taback’s illustrations are extremely colorful and creative, especially the die-cut format of the story, which is where Simms Taback cuts out shapes of Joseph’s clothing on the right side of the page and when the reader turns the page, the die-cut portion of the page reveals new clothing that Joseph made from his old clothing on the previous page.  I also loved the way that Simms Taback pasted various realistic photos on his drawings as they made the illustrations in this book somewhat surreal yet creative at the same time, since it is not every day that you see real-life photos collide with cartoonish illustrations.  My most favorite image in this book was the image of Joseph himself as he has the same appearance of the author himself and he is always shown in a shaggy short beard, blue patched up pants and a yellow shirt.

Overall, “Joseph Had a Little Overcoat” is one creative and hilarious book that children will sing along with for many, many years to come!  I would recommend this book to children ages four and up since there is nothing inappropriate in this book for smaller children.