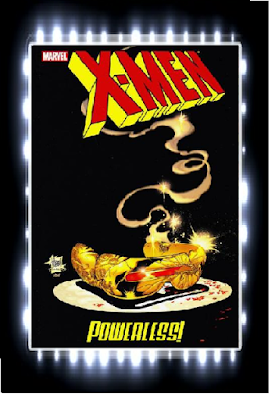 Imagine what would happen if the X-Men actually lost their powers.  What would the X-Men do now that they no longer have their mutant powers at their disposal?  Well, that is what happens in this graphic novel called “X-Men: Powerless!” where a strange occurrence causes the X-Men to lose their powers and deal with the fact that they might never fight evil again.

After the death of Cyclops, Professor Xavier decides to leave the X-Men to help the skrulls find a place to live and the X-Men are left to decide what they should do now.  Suddenly, the High Evolutionary comes by and tells the X-Men that he is taking away their powers because he wanted peace on earth since he thought that there would be no more fighting between the humans and the mutants if the mutants are like the humans.  Unknown to both the High Evolutionary and the X-Men, there is a darker force behind here that is pulling the strings of this plan and the X-Men may have to stop this menace without the help of their powers!  There are a total of five comic book series in this volume and they include:

Uncanny X-Men – Issues #379 (What Dreams May Come…)-#380 (Heaven’s Shadow): written by Alan Davis along with artwork by Tom Raney and coloring by Brian Haberlin

Cable – Issue #78 (I Still Believe I Cannot be Saved): written by Joe Pruett along with artwork by Juan Santacruz and coloring by Gloria Vasquez

X-Force – Issue #101 (Learning to Fly): written by Joseph Harris along with artwork by Steven Harris and coloring by Matt Hicks Harris

Wolverine – Issue #149 (Resurrection): written by Erik Larsen along with artwork by Graham Nolan and coloring by Marie Javins

X-Men – Issue #99: written by Alan Davis along with artwork by Terry Kavanagh and coloring by Hi-Fi Design

Interesting concept: When I first picked up this graphic novel, I was thinking to myself about what would the X-Men do if they lost their mutant abilities? Would they try to go back to their normal lives if they do not have to fight anymore enemies now that their powers are gone?  I must admit that this concept did pique my interest and I was willing to give this comic a shot.  Since there are five separate comic series in this volume, there are many different perspectives on how the characters deal with the issue of losing their powers and I enjoyed seeing those different perspectives, especially with the X-Force team and the X-Men themselves as they are shocked about what happened and even though they tried to go back to their normal lives, they found out that their mutant abilities have become apart of who they are.  I loved how each writer (Alan Davis, Erik Larsen, Joseph Harris, and Joe Pruett) all put their own input on how the mutants have to deal with the situation about them losing their powers as it brought creativity to this volume and so many different perspectives on the situation that I enjoyed with great relish!

Tom Raney and Graham Nolan’s artwork: I really enjoyed Tom Raney and Graham Nolan’s artwork in both “Uncanny X-Men” and “Wolverine” as they both bring a really interesting and “classic nostalgia” spin to the volume!  Tom Raney’s artwork in “Uncanny X-Men” really takes me back to the older X-Men comics as the characters body proportions are appropriately drawn and the characters’ facial expressions are drawn beautifully as you can see the shock and anger on the characters’ faces.  I also loved the coloring done by Brian Haberlin as it made the characters truly stand out and I loved the details being put into Iceman’s ice armor as it literally shines making his ice form truly dazzling to look at.  In the “Wolverine” comic, I loved the way that Graham Nolan gives the story a more crime-noir feel as the artwork is slightly scratchy, but it is in that old-style comic book feel from the 1990s that just makes me feel so nostalgic right now.  My favorite image was at the beginning of the story when Wolverine enters a diner and he is wearing a dirty looking jacket and blue jeans while having a dark and mysterious look on his face that looks like he is having a rough time dealing with the loss of his powers.

Even though the concept of this volume was extremely interesting, it feels like the story is not really filling in the gaps with some of the characters mentioned and the plot moves a bit too slowly for my tastes.  I am always obsessive when it comes to having good character development in stories in general and even though we get a good glimpse at how the X-Men felt about losing their powers and trying to live a normal life again, there is not really a lot action in this volume and I felt like just skimming through this volume just to get to the action scenes.  I usually like a good balance between action and character development in the stories I read and if there are too many scenes where characters are just talking, then it will get boring but if there are too many action scenes in a story, then we would not be able to understand about what the purpose of the action scenes are for.  That is why writers like Joss Whedon and Chris Claremont have a good grip on balancing character development and action scenes so that way we would not be too bored with the story.  Also, in this volume, I felt that Cable’s and Wolverine’s comic issues were not really important to the main plot since it feels like I am reading two different comics whenever I am reading Cable’s comic and Wolverine’s comic in this volume and even though both comics dealt with how the main characters lost their powers, it still feels too different to the main story of all the mutants losing their powers and trying to get to the High Evolutionary to get their powers back.

Overall, “X-Men: Powerless” was an above average reading that would be enjoyable if you want to see how the X-Men deal with the idea of losing their powers.  The concept is really enjoyable, but the story could have been better if there was more action and more involvement from the other mutants besides the main X-Men, hence the three and a half rating I gave this volume.