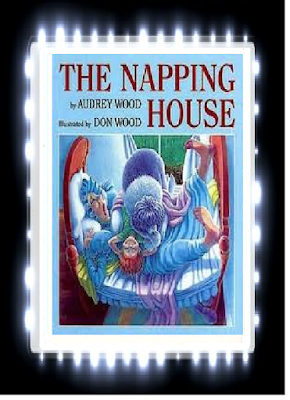 “The Napping House” is one of Audrey Wood’s and Don Wood’s earlier children’s books and is probably one of their most peaceful books ever written.  “The Napping House” was extremely popular back in the 80s for its numerous awards that it won which includes:  the 1984 New York Times Best Illustrated Children’s Book, the 1984 Golden Kite Award from Society of Children’s Book Writers and the 1984 American Library Association Notable Book for Children.

Audrey Wood’s lyrical writing is at its best as she narrates how all the family members are sleeping in the house only to be awakened by a wakeful flea.  Don Wood’s illustrations are colorful and beautiful beyond all reason, especially when he draws the rain shower at the beginning of the book and he makes the sky look gray, which is extremely effective on the realism of this story as the characters look like real people.  Another advantage to Don Wood’s illustrations is that his illustrations are humorous especially of the scenes where each family member bump into each other and their eyes popped out of their heads as they are surprised at being awakened by each other.

“The Napping House” is truly a masterpiece and because of Audrey Wood’s creative verses and Don Wood’s beautiful illustrations, this book is surely to capture the hearts of many young children.  I recommend this book to children ages three and up since it is simple to read and the situation is extremely simple to understand.