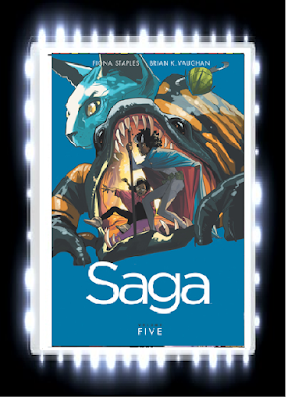 Another fantastic volume of “Saga” from the great mind of Brian K. Vaughan?  You bet I will check this new volume out as soon as it was released and I was seriously blown away by this action packed volume!  “Saga: Volume Five” is another awesome installment of Brian K. Vaughan’s legendary comic book series that is definitely worth its weight in gold!

After the disastrous falling out between Marko and Alana in the previous volume, Alana, Marko’s mother and Hazel find themselves being kidnapped by Dengo, the janitor robot who kidnapped Prince Robot IV’s newborn baby in the last volume.  This then leads to Marko being forced to work with Prince Robot IV in order to find their missing families.  Meanwhile, Gwendolyn, Sophie and The Will’s sister The Brand, set out on a journey together to retrieve a cure that will help save The Will’s life, but the journey is going to be pretty dangerous for the three (four if we are including the Lying Cat) travelers!

Brian K. Vaughan’s writing: As usual, Brian K. Vaughan’s writing is spot on and I really loved the fact that this volume was much more action driven then the previous volumes, which were mostly character driven and we actually get to see several characters really kicking some serious butt in this volume!  I just loved the way that Brian K. Vaughan really made Alana into such an awesome fighter in this volume as it was hinted at early on that Alana used to be in the military and we finally get the chance to see Alana’s combat skills displayed in this volume, especially when she tries to protect her daughter Hazel from various people who want to harm her.  I also loved the fact that Marko is still trying to find Alana and Hazel again as it showed how much he really cared about his family, despite his fight with Alana in the last volume.  It was also heartbreaking learning about Marko’s backstory and why him accidentally hurting Alana had such a tragic impact on him and how he tries to make amends for what he had done to Alana.  I really enjoyed the side story involving Gwendolyn, Sophie, the Lying Cat and the Brand trying to find a cure for the Will, who was injured a few volumes ago. I really loved the relationship between these four travelers as it shows that they all cared about the Will in their own way and are willing to work together to obtain the cure needed to help the Will.  The only thing that got me about this volume was that I did not see one single appearance from my favorite ghost girl Izabel…OH IZABEL! WHERE ARE YOU!?

For anyone who does not like strong language, gory violence and graphic images, there are many scenes in this volume where characters are blown up and blood and guts are sprayed all over and some strong language such as the constant use of the “f” word and the “a” word.  Also, there is some nudity in this volume, as well as some sex scenes that might make some people cringe.

Overall, is “Saga: Volume Five” worth picking up?  YES! YES IT IS! Go ahead and pick up this sucker already and be amazed by the wonderful world of “Saga!”