Exactly! Read the books that YOU want to read!

Email ThisBlogThis!Share to TwitterShare to FacebookShare to Pinterest
Labels: 2014 news, those darn quotes 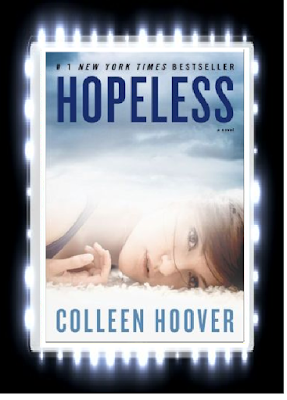 I will admit that I had just recently gotten into the new adult genre, since this genre was just recently created.  So, after I heard so many good things about Colleen Hoover’s popular contemporary romance book “Hopeless,” I just had to give this book a shot and man, did this book take me on one intense and thrilling ride!

Sky Davis was an ordinary senior in high school (well, except that her guardian Karen refuses any kind of technology in their house, causing Sky to be clueless around technology when she got to school), until she meets a mysterious guy named Dean Holder, who seem to have a terrible reputation at school for getting into many fights years ago.  But when Sky and Holder get to know each other, Sky soon realizes that Holder is not as terrible as he seems to be and she slowly starts to fall in love with him.  Unfortunately, Sky ends up discovering a dark secret about herself once memories of her old life starts haunting her and her love towards Dean Holder will soon be tested to its limit once that secret is out.

Whoa…if I have any words to describe Colleen Hoover’s tale of secrets, betrayals and forbidden love, it would have to be…ABSOLUTELY INTENSE AND EMOTIONAL!  Colleen Hoover had done a brilliant job at weaving true and raw emotion into this story while balancing the story with suspense and terror.  I loved the way that Colleen Hoover portrayed Sky and Dean’s relationship with each other as they truly care for each other when they are protecting each other from their own insecurities about being together due to the both of them having tragic pasts that they have to overcome throughout the book.  I also loved the sarcastic bantering that went on between them as it made them intriguing and cute as a couple and they both always give out the best comebacks to each other!  I really loved most of the characters in this book, especially Sky’s best friends Six and Breckin since they were so hilarious to read about, but the two characters I loved the most in this book were both Sky Davis and Dean Holder themselves!  I was really intrigued in Sky’s character as she is shown to be a strong and intelligent teenage girl who is always yearning to learn more about the world around her.  However, when Sky’s tragic past ends up haunting her, I actually felt sympathy for her, especially during the moments where she would break down and cry, since I cannot imagine having to go through the horrific situation she experienced in her past.  Now, Dean Holder was definitely one hero that ended up growing on me towards the end of the book and for that, I am grateful!  I loved the fact that Dean really cares about Sky’s feelings and how he tried to do everything in his power to protect Sky from getting hurt from her own insecurities about being close to anyone in a relationship.  I also loved Dean Holder’s personality as he is both kind and tough, which is something I love in many romance heroes.

The reason why I took off half a point from the rating was because I felt that the first half of the book was a little too slow in starting up the story line.  I will admit I got a bit annoyed with both Sky and Dean holding back their feelings for each other for the majority of the first half of the book since it slowed down the pacing of the story.  Therefore, things only got more interesting when Sky’s tragic past comes to light and the book’s tone shifted from heartwarming moments to pure terror and heartbreak.  Also, there are some unsettling moments in this book, especially in the second half of the book where Sky’s tragic past is revealed, so readers who are easily offended by these moments might want to trend the second half of the book lightly.

Overall, “Hopeless” is a great book about finding out the true meaning of love and also finding the strength in yourself to live through life despite going through some terrible situations.  I would highly recommend this book to new adult fans everywhere!

Posted by Ronyell (a.k.a. Rabbitearsblog) at 3:14 AM No comments: 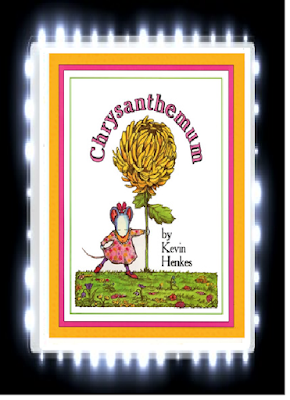 “Chrysanthemum” is a cute tale from Kevin Henkes about how a young girl mouse named Chrysanthemum tries to appreciate her long and unusual name when she goes to school and is teased by her  classmates.  “Chrysanthemum” is a truly heartwarming story that children will easily enjoy for many years.

Kevin Henkes has done an excellent job at both writing and illustrating this book.  Kevin Henkes’ story about how Chrysanthemum starts to loathe her name because some kids teased her about her name is easily relatable to children who have also been teased about their names.  Also, the story does a great job at describing how much Chrysanthemum loves her name and even though she was teased about her name, she learns to accept her name and many children will learn that they should not let other kids tease them about their names and that they should accept who they are no matter what.  Kevin Henkes’ illustrations are cute as all the characters are mice that perform human activities such as dancing around on their hind legs.  The image that stood out the most was the image of Mrs. Twinkle herself as the text describes how amazing she is and the image strongly reinforces that by having Mrs. Twinkle look extremely beautiful and having a large stomach due to her being pregnant which is one of the few times I actually saw an image of a pregnant character in a children’s book.

“Chrysanthemum” is a wonderful book about accepting who you are no matter what other people say that children will easily relate to and enjoy.  I would recommend this book to children ages five and up since there is nothing inappropriate in the content of this book. 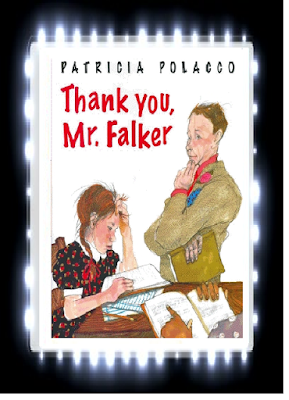 Boy, am I on the roll with reading various by none other than Patricia Polacco herself!  This time, Patricia Polacco writes an autobiographical book called “Thank you, Mr. Falker” where it details the life of a young girl named Trisha who struggles with learning how to read and how an inspirational teacher named Mr. Falker tries to help her read.  “Thank you, Mr. Falker” is certainly one of the most memorable children’s books to be created for children who also have trouble learning how to read.

Oh my goodness! Imagine my surprise when I realized that this book is actually based on Patricia Polacco’s real life problems with learning how to read!  It was this aspect of this story that really drew me into this book!  I loved the way that Patricia Polacco (Trisha in this book) relates her own experiences to the audience since I felt like this would greatly help children who also have problems with reading and who were teased by this problem, which bullying is a big issue for many schools.  What I really loved about this book was the teacher Mr. Falker himself as he was a truly inspirational teacher who tried to do his best to help out Trisha and I believe that with teachers like Mr. Falker who try to help out students with their problems and try to give them confidence in themselves are the best kind to have in any school!  Patricia Polacco’s illustrations are just as gorgeous in this book as they were in her other books as the characters look extremely realistic, especially the characters’ facial expressions that convey their emotions.  The image that truly stood out the most for me was the image of Trisha crying after the kids started teasing her and Patricia Polacco had effectively illustrated Trisha’s face being slightly red and the way she covers her mouth to hide her sadness made this a truly emotional image.

Overall, “Thank you, Mr. Falker” is truly one of the most inspirational children’s books about children who have problems learning how to read that children will easily relate to.  I would recommend this book to children ages five and up since the bullying scenes might too upsetting for smaller children.