[BOOK REVIEW] Meanwhile Back at the Ranch by Trinka Hakes Noble 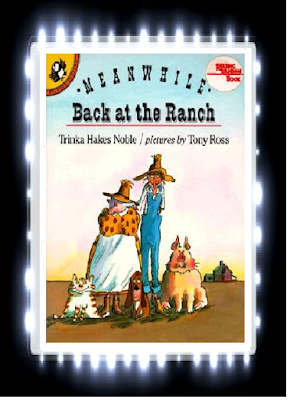 Title:  Meanwhile Back at the Ranch

I actually first saw this book on an episode of “Reading Rainbow” and I have instantly started to love this book!  “Meanwhile Back at the Ranch” is a hilarious book written by Trinka Hakes Noble along with illustrations by Tony Ross and it is about how Rancher Hicks goes down to Sleepy Gulch to see what is happening, while his wife Elna has wild adventures on the ranch.  “Meanwhile Back at the Ranch” is a truly hilarious book that children will enjoy for many years!

Trinka Hakes Noble has done it again as she tells the story of how a couple have different adventures while they are away from each other.  Trinka Hakes Noble makes this story creative and hilarious at the same time as the story is set up from two different perspectives of the couples as Rancher Hicks’ side of the story is always boring and repetitive while Elna’s side of the story is full of excitement and children will easily love the two sided story setup.  Tony Ross’ illustrations are hilarious and surreal as the characters are drawn crudely as they have long skinny legs and odd shaped heads and even though the illustrations look a little dreary, the events that took place in this book make the illustrations more hilarious than dark.

“Meanwhile Back at the Ranch” is an extremely creative and hilarious book about two different perspectives on the lavish life and the boring life and children will love the hilarious adventures of these two couples.  I would recommend this book to children ages four and up since there is nothing inappropriate in this book.