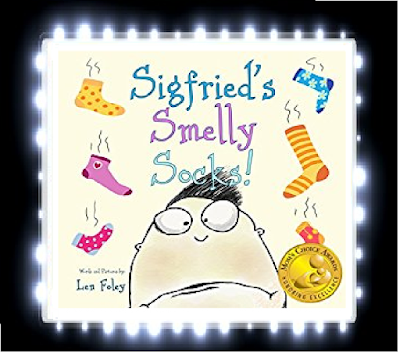 I received this book through Amazon Kindle and OnlineBookClub.org in exchange for an honest review.

Alright, I have a confession to make.  I have been trying to get into some new ways to read books online, which includes signing up for NetGalley and Edelweiss (which I have been enjoying so much lately).  So, I was a bit hesitant in using Amazon Kindle since I was so used to using NetGalley and Edelweiss to get my books online.  But, once I decided to try Amazon Kindle, I actually started to enjoy using it and one of the first books I had read from Amazon Kindle is “Sigfried’s Smelly Socks!” by Len Foley and it was quite a cute read!

A young boy is narrating the story about how he encounters several different things that smell horrible which included a rotten banana, dog urine, and his sister Piper’s dirty diaper.  But none of those things compared to the smell of his socks, which the boy describes as smelling like rotten cabbage, a toilet seat and dog slobber!  Now, that is what I call “SMELLY SOCKS!”

Len Foley did a good job at both writing and illustrating this bizarre children’s book!  I liked the way that Len Foley wrote this book as the story was quite humorous and exaggerated with the little boy, who is the narrator, listing all the horrible smells that he has encountered, including rotten foods and his smelly socks.  I liked the way that the boy in the story was exaggerating his descriptions of how badly his socks smell, such as saying that his socks smell like dog slobber and rotten cabbages as it puts an interesting spin on how children identify the different types of smells they encountered in real life.  I also liked the fact that the little boy was comparing the smell of his smelly socks to other smelly items such as a dirty diaper, a rotten banana and an old pizza slice as it would help children identify with what items have stinky smells.  Len Foley’s artwork was quite humorous to look at as all the characters have exaggerated features such as large noses and large rounded eyes.  The artwork reminds me a bit of Tedd Arnold’s artwork from his children’s books “Green Wilma” and the “Parts” series as they both have characters who have large rounded eyes that make their appearances look humorous.

The reason why I gave this book a four-star rating was because even though I found the premise to be cute, the story was not quite as hilarious to me as other children’s books with gross out humor like “Walter the Farting Dog” and “Pat the Beastie.”  Also, for anyone who does not like gross out humor, this book does have some gross moments, such as giving us images of realistic food items that are rotting (which I will admit made me feel a bit nauseous at times).

Overall, “Siegfried’s Smelly Socks” is a truly cute children’s book about exploring horrible smells that children who are interested in gross humor will definitely enjoy!  I would recommend this book to children ages four and up since some children might be a bit gross out by some of the rotting food imagery.