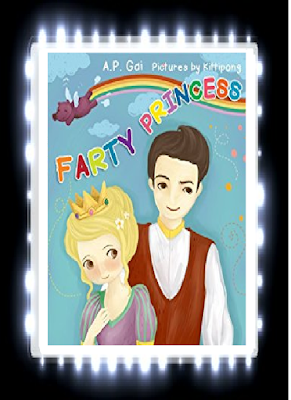 I received this book through Amazon Kindle in exchange for an honest review.

I had read a few children’s books that dealt with toilet humor (or to get specific here, fart humor) like “Walter the Farting Dog” and I usually enjoy them since they are so hilarious to read through.  So, when I saw this new children’s book title from Amazon called “Farty Princess” by A.P. Gai along with artwork by Kittipong, I just had to check this little title out!

Princess Priscilla was well loved by the people of her kingdom as she was extremely friendly to everyone around her.  Unfortunately, Priscilla has a little problem…she cannot stop farting uncontrollably and her farts smell so bad that they make anyone who has the misfortunate of being near them faint!  One day, Priscilla was finally going to marry her fiancé Prince Paul and she was so happy about the occasion that she ended up farting in bliss and her farts smelled so bad that it put Prince Paul into a deep sleep!  Now, Priscilla must go on a journey to find a cure for Prince Paul’s curse!

A.P. Gai has done a good job with writing this book as I found myself giggling to myself at the toilet humor going on in this book!  I liked the way that A.P. Gai made Princess Priscilla be the one who rescues the Prince from a curse she (unknowingly) cast upon the Prince as it serves as a nice twist to the usual “Prince saves the Princess” plot line that is usually found in many fairy tales.  I also liked the fact that Princess Priscilla is portrayed as being extremely friendly to everyone she meets along with on her journey as it made her into a likable character and I especially liked the part about her farts saving her from misfortune throughout her journey!  Kittipong’s artwork is adorable to look at as all the characters truly look like they came out of an innocent fairy tale story and I especially loved the appearance of Priscilla herself as she has a cute appearance despite the fact that she farts a lot.  I also loved the way that Kittipong drew Priscilla’s farts as they are not colored in green, which is the usual color you see with farts being illustrated.  Instead, her farts are colored in purple and pink colors, which makes her farts look cute instead of disgusting (Farts are cute? Well, that is the first time I said that)!

The reason why I gave this book a three-and-a-half-star rating was because while the book had a pretty cute (and hilarious) premise, I felt that both the story and the characters were a bit bland at times.  As much as I like the fact that Princess Priscilla is an extremely nice character, I felt that there was not that much dimension to her character and this also includes her love interest Prince Paul, who was just there to be put into a coma for most of the story.

Overall, while “Farty Princess” is a cute story that is full of toilet humor, the story would have benefited more if there were more dimensions to the characters and to the story itself.  I would recommend this book to children ages five and up since some children might not like the gross humor in this book.