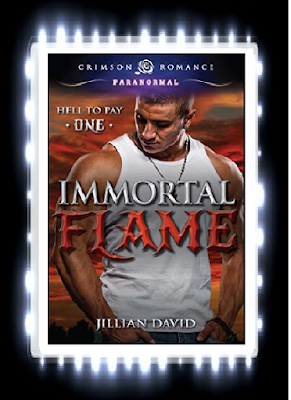 I would like to thank Reading Alley and Crimson Romance for providing me a copy of this book in exchange for an honest review.

I have a bit of a confession to make:  I actually had this pretty little ARC on my shelf since 2016 and I still had not read it…until now!  After I finished reading “Immortal Flame” by Jillian David, I was seriously whacking myself in the head for not reading this ARC much sooner!  “Immortal Flame” was a truly fantastic paranormal romance read that made me want to read more from this series!

Peter Blackstone is an unusual person because even though he served as a veteran in World War II, he still looks extremely young for being a vet from World War II.  That is because in 1945, when Peter’s wife Claire was dying of a deadly sickness, Peter traded his soul to the devil, Jerahmeel in order to save Claire’s life.  But, in trading his soul, Peter is now a hired killer for the devil and he must go out and kill every bad person in the world so that way Jerahmeel would be able to feed on the souls of the people killed in order to survive.  At the same time, a young doctor named Allison La Croix seems to possess the ability to be able to see people’s deaths when she touches a person, which causes her so much turmoil since she wanted to live a normal life for once.  One day however, Peter ends up getting into a car accident and when he is taken to the hospital to tend to his wounds, Allison stumbles upon him and when she touched Peter, she starts seeing images of death that overwhelms her to near insanity.  It was then that Peter discovered about Allison’s powers and he tries to help Allison control her powers so she will not see people’s deaths too often every time she touches someone.  Unfortunately, Jerahmeel starts seeing that Peter and Allison are developing a close relationship with each other and he decides to send out one of his minions to kill Allison so Peter will never back out of his contract.  Now, Peter and Allsion will have to avoid Jerahmeel’s minion in order to not only survive but to save their love for each other in the process!

Wow!  I was quite impressed with this book! Jillian David’s writing was quite entertaining and sexy as heck as I found myself reading through this book rather quickly due to waiting with anticipation at how Allison and Peter’s love will survive Jerahmeel’s attempts to separate them!  I loved the way that Jillian David created this creative world as I was intrigued by the fact that the devil is apart of this world and it brings a sense of danger to this world as the characters have to watch their backs whenever the devil gets HUNGRY. I also loved the way that Jillian David wrote both Allison and Peter as I find their relationship to be quite realistic and at times tragic due to the state of their situations.  I actually felt bad for both Allison and Peter as they both wanted to live normal lives, but their powers make things difficult for them and I was wishing throughout the whole story that they both get their happily ever after.  I really loved Peter’s character as he is shown to be quite courageous, caring, strong and SEXY and I loved the fact that he is willing to put his life on the line if it means protecting Allison at all costs.  I also loved Allison herself as despite her fearing her powers, she is shown to be just as caring as Peter as she also tries to protect her loved ones from her powers and from any evil force that might befall her.  And the sex scenes are full of PURE SIZZLE that I was fanning myself every time a sex scene comes up between Allison and Peter!

For anyone who does not like gory violence or sex scenes, there are some explicit sex scenes that readers can skim over if they do not like reading sex scenes.  Also, the gory violence in this novel are a bit graphic and even disturbing as I found myself cringing a bit at how gruesome the violence towards certain characters were.  Also, and this is a bit of a small nitpick, but I wished that Allison would have done more in this novel than just worry about her future and fearing her powers as I wanted to see her actually fight against the bad guys using her powers.  Oh well, maybe we will see some of that in the later novels!