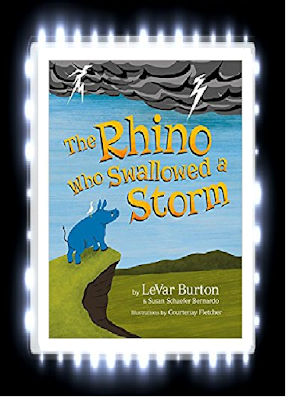 Title:  The Rhino Who Swallowed a Storm

I have been a huge fan of “Reading Rainbow” ever since I was a child and I have always enjoyed reading the books that were either featured or suggested on the TV series.  So, imagine my surprise and delight when I found out that LeVar Burton, the longtime host of “Reading Rainbow” was going to write a children’s book called “The Rhino Who Swallowed a Storm,” along with co-writing with Susan Schaefer Bernardo and artwork by Courtenay Fletcher.  This book will surely inspire many children to get through hard times themselves!

The story starts off with Mica Mouse sitting with her father during a storm and she became worried about the storm due to a hurricane coming in and destroying her home over a year ago. Mica’s father then went to comfort her by reading her a story about a rhino who also went through some hard times.

In the story, the rhino was living peacefully in his home when all of a sudden, a strong storm came through the valley and started destroying everything that the rhino cared about.  The rhino was so upset by all the destruction that it ended up swallowing the storm.  After the rhino swallowed the storm, the storm started causing so much disturbance within the rhino and the rhino was at a lost at what to do.  The spider then comes by and tells the rhino this verse:

“The world up above is shattered and gray,
But it’s where you belong, so you must find a way
To let that storm out and move through your sorrow.
You’ll find many helpers on your road to tomorrow.”

So, the rhino decided to go on a quest to get rid of the storm that is boiling inside of him.

Will the rhino be successful on his quest?

Wow! I was quite impressed with this inspiring children’s book that was written by none other than LeVar Burton of “Reading Rainbow” fame!  LeVar Burton and Susan Schaefer Bernardo did a great job at writing this story as I found this story to be quite inspirational, especially for children who have to deal with the harshness of the real world and need to find a way to go through life in such a negative world.  I actually found myself relating to both Mica Mouse and the rhinoceros in the story as I sometimes found myself wondering about how I can deal with all the wars, deaths and prejudice going on in this world and I like the fact that this book tries to encourage children to get through tough times by inspiring them to remain positive and be aware of all the friends and families they have that will help them through tough times.  Courtenay Fletcher’s artwork is highly creative and cute to look at as I enjoyed the images of both the rhinoceros and Mica Mouse as the artwork for Mica Mouse and her father are in smooth watercolors while the artwork for the rhinoceros is in cut out figures to help the readers distinguished between the two stories.

The reason why I took off half a star from the rating was because I felt that this story was a bit too lengthy in trying to get its message across and I wished that they would have trimmed out a few verses that the animals were trying to tell the Rhino in order to get to the meat of the story much faster.

Overall, “The Rhino Who Swallowed a Storm” is a great inspirational book for children who are also going through hard times and want a good book that can inspire them to remain positive in such a harsh world.  I would recommend this book to children age five and up since the length and complexity of this book might be difficult for some smaller children.