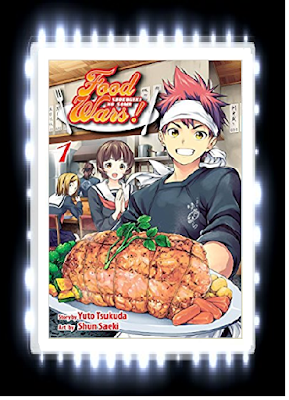 Now, I have been a huge fan of anime that deals with cooking and I had decided that I wanted to try my hand into a manga series that deals with food!  What luck I had when I picked up this popular manga series called “Food Wars! Volume One” by Yuto Tsukuda along with artwork by Shun Saeki and I was quite impressed with the bizarre creativity of this manga!

The story starts off with a young teenage boy named Soma Yukihira who works at his father’s family restaurant in a poor part of town and yet, the family restaurant is well known for their extremely tasty dishes.  One day however, Soma’s father decided to sell the family restaurant and send Soma to a classy culinary school.  At first, Soma is skeptical about all this since his major goal in life is to surpass his father in cooking.  But, when Soma’s father mentions that if he passes this school, then Soma might have a chance at surpassing him, Soma decides to give this high class culinary school a chance!

Can Soma graduate from this high class culinary school?

Wow! I have to admit that this was one of the most unusual yet creative manga that I had read that dealt with cooking!  Yuto Tsukuda had done a great job at writing this story as I found myself being immersed with the bizarre cooking world established in this volume and how each character treats graduating from this high class culinary school as serious business.  I also loved the fact that we get some kind of “Toriko” vibe here as this series may not be as action heavy as “Toriko,” but it still treats the cooking scenes as scenes you would get out of an action movie!
I really loved the way that Yuto Tsukuda wrote each character, especially Soma Yukihira, who is probably one of the most interesting characters in this story!  Even though Soma can be a little rude towards other people at times, he is always determined to make the best dishes no matter how much the odds are stacked up against him and I always enjoyed this determined attiude that Soma possesses since it makes him a really likable character.  Shun Saeki’s artwork is fantastic to look at as the characters are gorgeously drawn and I loved seeing some of the lighting around the characters as it makes them glow on the pages.  I also enjoyed seeing the various tasty dishes that are shown in this volume, such as the image of Soma making a bacon wrapped potato dish, which looked quite tasty and unique!

The reason why I took off half a star from the rating was because of the sexual imagery that came up whenever the characters are experiencing Soma’s cooking and you can see images of the characters imagining themselves halfway naked whenever they are describing the taste of the foods they sampled.  Now, I usually don’t mind seeing sexual imagery depending on whether or not the story is a romance or something of the sort, but because this is a series about cooking, it just felt a bit too out of place in this setting and I sometimes cringed a bit whenever the sexual images come up in the story.

Overall, “Food Wars! Volume One” is a fun volume for anyone who loves manga that deals with cooking and action and I am definitely going to try to check out the next volume in this series!