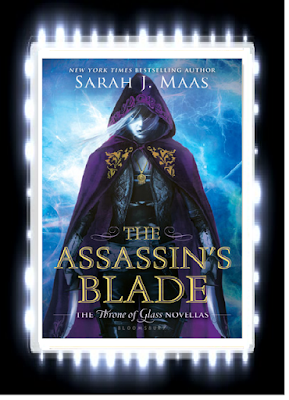 This book is basically a collection of stories that detail Celaena Sardothien’s adventures before the “Throne of Glass” series and the stories included in this book are:

This book basically details Celaena Sardothien’s adventures as a world renowned assassin under the roof of Arobynn Hamel, the leader of the ruthless Assassins’ Guild.  Celaena believed that her life was perfect as she was known as the best assassin in Arobynn’s Assassin’s Guild, until one day, she decided to defy her master Arobynn when she released the slaves from Skull’s Bay and ends up paying a heavy price.  So, Celaena ends up spending some time in the desert to retrain herself in the art of assassination and those months at the desert had ended up changing her life forever as Celaena will soon learn about the true meaning of love, trust and betrayal.

Wow! How could I wait this long to actually check this series out?  After I heard so many good things about Sarah J. Maas’ “Throne of Glass” series, I just had to check this prequel out and I sure was glad that I did check this book out as I got to know more about Celaena as a character and what her life was like before the events of the first “Throne of Glass” book.  I loved the way that Sarah J. Maas wrote the characters and the action sequences in this book as they complement each other extremely well and I was literally sitting on the edge of my seat trying to see if Celaena will get out of the dangerous situations that she is often thrown in.  Probably the best things about this book were the characters themselves as they were truly enjoyable to read and I often found myself sympathizing with their reactions in certain situations, especially Celaena.  Celaena Sardothien is a truly amazing heroine as she is tough and charismatic about her assassin abilities and I loved the scenes where Celaena shows her deadly assassin abilities by taking down all of her opponents without breaking a sweat!  I also loved Celaena’s relationship with Sam as they started out as rivals to each other and then as the story goes on, their relationship starts to develop in ways that were beautiful and hilarious and I was rooting for these two to get together throughout the whole book!

For anyone who does not like strong language, this book does have a surprising amount of strong languages littered throughout including the “s” word and the “f” word.

Overall, “The Assassin’s Blade” is a fantastic book for anyone who loves reading about strong female protagonists and I will definitely check out the rest of the “Throne of Glass” series soon!