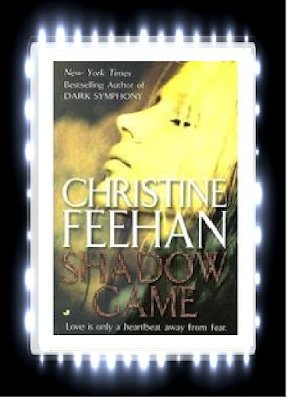 Now, I have read many paranormal romance novels by different authors, but I must admit that “Shadow Game,” the first book in Christine Feehan’s “Ghost Walker” series was the first time I had ever read any of Christine Feehan’s works!  This is really surprising to me because even though I saw like a million books written by Christine Feehan at my local library, I never once thought about picking up any of her books and now I seriously wished I had!

Peter Whitney was a renowned scientist who was able to create an experiment that would help enhance the psychic abilities of an elite squadron in the military and his equally brilliant daughter Lily Whitney would help out on his accomplishments. One tragic day however, Peter Whitney starts to notice that something was going wrong with his experiments as the subjects in question, a group of soldiers who volunteered for this experiment which among them included Captain Ryland Miller, were suddenly dying of mysterious circumstances.  When Peter Whitney discovered about who was sabotaging his experiments, he ends up being murdered before he was able to tell his daughter Lily everything about his experiments.  Luckily, since Lily is a telepath herself, her father was able to communicate with her that she needs to check out the videos of his experiments in order to right the wrongs he had done in the past before he died.  Now, Lily is determined to discover the dark secret of her father’s experiments while trying to figure out who murdered her father.  But in order to learn more about his experiments, Lily has to try to release the soldiers who were being experimented on and there she meets the strong willed Captain Ryland Miller, who she immediately begins to fall in love with.  Lily and Ryland will soon discover that there is more between them then just a telepathic attraction with each other as they discover the dark secrets of Peter Whitney’s experiments together.

Wow!  I seriously cannot believe that I had not read any of Christine Feehan’s books before this one!  Christine Feehan had done a brilliant job at writing this book as the relationships between each character felt so real and raw and I really enjoyed the bantering between the characters, especially between Ryland and Lily!  I also loved the way that Christine Feehan managed to mix romance and action into this book as I was literally sitting on the edge of my seat trying to see if Lily and Ryland discovered who murdered Peter Whitney while developing feelings for each other.  What I loved the most about this book were the characters themselves as they were interesting and fun to read about, especially Lily and Ryland!  Lily Whitney was such a fantastic heroine as she is smart and courageous and I loved the fact that she was willing to put her life on the line in order to right the wrongs of her father and protect Ryland and his men.  I also loved the fact that she has so much scientific knowledge about the experiments that her father was engaged in as it showed how she is willing to use her intelligence to help the people she cared about.  Oh man, Captain Ryland Miller, you wicked devil, you!  I have to seriously say that Captain Ryland Miller is one of my most favorite heroes ever as I loved the way that he cares about Lily and is willing to do everything in his power to protect her from harm.  I also loved his bantering with Lily as I just cannot help but giggle and feel tingly inside whenever he is being so sexy towards her.  One of my favorite quotes from this book is this:

For anyone who does not like language in a book, this book does have some language, although it is not as bad as some romance novels.  Also, there are many scenes in this book where the characters are in danger of being murdered and that might be too intense for some people to handle.

Overall, “Shadow Game” is a truly fantastic read for fellow paranormal romance fans and I am definitely going to check out the rest of the “Ghost Walker” series!