[BOOK REVIEW] The Fisherman and his Wife by Eric Metaxas 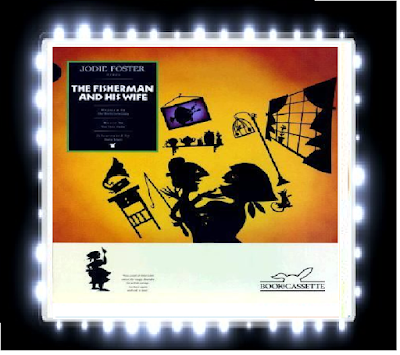 Title:  The Fisherman and his Wife

Most of the Rabbit Ears Series that I have seen were mostly aimed at children and would not contain material objectionable to younger children. However, The Fisherman and his Wife was the first story from Rabbit Ears that I have watched that actually kept me at the edge of my seat. The illustrations, the music, and the overall mood of the story are somewhat intense and gloomy at the same time, which has become one of my most watched Rabbit Ears story other than "The Fool and the Flying Ship."

Like every Rabbit Ears story, there is a combination of narration from various celebrities, music, and illustrations to complement to the story without using animation to tell the story. The Fisherman and his Wife is no different from the other Rabbit Ears stories and is narrated by none other than Jodie Foster. Jodie Foster's narration is monotonic as she speaks solely in a gloomy tone giving the story a mysterious edge. Diana Bryan's dark silhouette illustrations enhances the story by creating frightening allusions for the story such as the large appearance of the flounder and scenes where the sea changes color dramatically from light blue to dark purple when the storm is approaching towards the fisherman. Van Dyke Parks' music is extremely mesmerizing as the music resembles a sort of old England tune giving the story a mysterious yet elegant feeling that ranges from the fisherman's mysterious encounter with the flounder to the elegant lifestyle of the fisherman's wife.

Parents should know that younger children may be frightened by this video because of the intense scenes involved in this video. One such intense scene involves the storm causing chaos where it goes, as dark silhouette houses and boulders come crashing down the hill and bright flashes of lightning fill the screen every few seconds. Also, to add to the intensity of the storm scene, when the fisherman approaches the sea, the sea starts changing colors drastically from a lively blue color to a dark and foreboding purple color. Many children may find the disturbing images, such as the brief scene where the flounder's eyes turn red during the storm and the dark silhouette images of the boulders and clouds overwhelming the screen, to be frightening indeed. However, this scene is not as bad as those gory scenes you would find in horror movies nowadays.

The Fisherman and his Wife is simply perfect and breathtaking. The images by Diana Bryan bring an eerie feel to the story but keeps the story fast-paced. Also, I enjoy how the moral of the story was established by starting off with the fisherman's wife wanting to be more powerful than anyone and then suddenly she loses all that power because she was so greedy. This moral applies to anyone who want many materialistic things but ends up losing everything in the end. Despite the intense scenes, this video is worth watching over and over again.