[BOOK REVIEW] How the Leopard Got His Spots by Rudyard Kipling 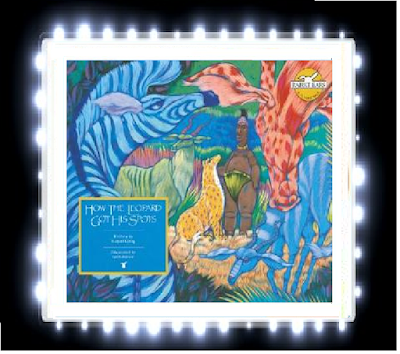 Title:  How the Leopard Got His Spots

“How the Leopard Got His Spots” is the fourth of the “Just So Stories” to be introduced in the Rabbit Ears Storybook Classics Series. The story features narration from Danny Glover, African music from Ladysmith Black Mambazo and Lori Lohstoeter’s colorful and beautiful illustrations.

Danny Glover narrates the story with an African accent, making this story filled with an African culture feeling to the story. Also, Danny Glover’s narration is full of energy as he seems to be ecstatic about narrating this “Just So” story. Ladysmith Black Mambazo’s African influenced music is mostly filled with the vocal talents of each member and in perfect harmony, they create a soothing and energetic vocal sounding music that greatly enhances the African roots of the story. Lori Lohstoeter’s illustrations are beautiful and colorful as the illustrator masterfully illustrates each animal with vibrant colors, especially when they changed their colors. The illustrations that are the true highlights of this story are the images of the Leopard drawn as an extremely beautiful creature as he is mostly yellow at first and is more beautiful when his skin is full of purple and reddish spots. Also, the Ethiopian is drawn as a calm and chubby man and when he changes his colors, he becomes more vibrant as he gets darker.

The only problem I found with this story is that Danny Glover’s narration is a bit difficult to understand. Danny Glover sounds as if he has a sore throat when narrating this story as his voice tends to give out on him at certain times such as, when he was describing the animals in the High Veldt and you can barely hear the words “Eland” and “Hartebeest” since his voice gets soft at these words.

“How the Leopard Got His Spots” is another classic from the “Just So Stories” collection and is truly a memorizing story about going through changes in life. This story is probably the most energetic and attractive of the four “Just So Stories” introduced on Rabbit Ears and is surely to delight children ages eight and up.