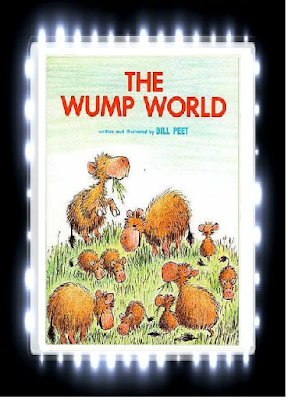 “The Wump World” is an inspiring environmental story from the great mind of Bill Peet and it is about how the Wumps’ world changes when a race called the Pollutians come onto the Wump world and start polluting the world.  “The Wump World” is a truly effective tale that really delivers the message of the dangers of pollution in a creative and dramatic way.

Bill Peet has done a magnificent job at bringing the message of the consequences of polluting as the Wump World becomes so polluted that no life can really live on the planet.  Many children will understand the negative effects of pollution as the book does a great job at describing the terrible effects that pollution caused on the Wump World.  Bill Peet’s illustrations are beautiful and effective as the illustrations of the wumps are creative as the wumps look like half moose and half elephant creatures and there are more creative images in this book as the Pollutians look like little blue people.  The images that stood out the most in this book are the images of the pollution that the Pollutians have brought to the Wump World as the sky and the world looks so dark and dreary, which effectively brings out the message of the dangers of pollution in an effective way.

Parents should know that the Pollutians do not seem to learn their lesson as they seem more intent on finding another planet to live on rather then just fixing up the mess they have caused.  Parents should tell their children that pollution is bad for the environment and that if they caused a mess, they have to clean up after themselves.

“The Wump World” is a heartwarming tale about the importance of respecting the environment that children will learn greatly from I would recommend this book to children ages five and up since the length of the book might bore smaller children.