[BOOK REVIEW] The Far Side Gallery 3 by Gary Larson 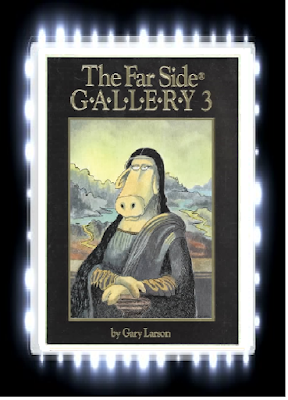 Title:  The Far Side Gallery 3

Basically, this volume contains many comic strips of Gary Larson’s famous series “The Far Side Gallery” and each comic strip has a character or an animal doing something hilarious in their situations.

Gary Larson’s writing: Gary Larson’s writing is truly brilliant and hilarious at the same time as the various characters in these comic strips are always doing something hilarious or playing off of a pun in an intriguing way.  I loved the way that Gary Larson takes puns such as “Primitive Fandango” and “Parakeet Furniture” and managed to twist them around by actually having the characters take the puns seriously, such as the parakeet furniture being shown as human fingers with the parakeets perching on them.  In all honesty, I really enjoyed almost all of the comic strips in this collection as they were creative and hilarious at the same time and here are a couple of excerpts that I considered to be some of my favorites in this collection:

“For crying out loud, I was hibernating!  Don’t you guys ever take a pulse?” (When a bear was mistaken for being dead at a funeral)

“Neither rain nor snow nor sleet nor hail, they said, could stop the mail…But they didn’t figure on Rexbo.”

“He’s dead, all right-beaked in the back…and, you know, this won’t be easy to solve.” (Solving the murder of a penguin among a group of penguins)

Probably the only thing problematic with this series is that there are a couple of comic strips in this collection that mentions “hell” a dozen times and that might be a bit upsetting for some readers.  Readers who do not like the mention of “hell” might want to skim over the comic strips that mention “hell” whenever they read this collection.

Overall, “The Far Side Gallery 3” is a truly brilliant series for fans of Gary Larson’s “Far Side Gallery” series and you will surely start rolling around the floor with laughter at this collection!