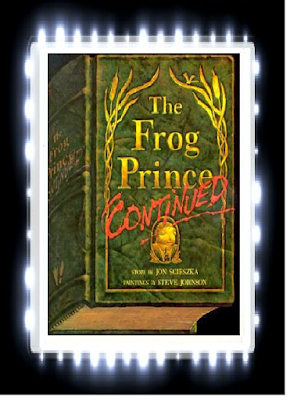 “The Frog Prince Continued” is another addition to Jon Scieska’s fractured fairy tales collection and is a hilarious story about marriage problems. Jon Scieska’s witty writing delightfully expresses the Frog Prince’s dilemma about being a human and changing back into a frog and Steve Johnson’s dark illustrations makes this story a classic dark comedy.

“The Frog Prince Continued” is full of dark humor and lively characters as they depict the Frog Prince’s attempts at turning back into a frog after a heated argument with his wife, the Princess. The characters that the Prince meets up with are the same characters that have came out of popular children’s books such as, “Hansel and Gretel,” “Cinderella,” and “Snow White.” The witches from each famous fairy tale play a significant role in this story as they at first seem to be the Frog Prince’s only hope in changing back to his normal life as a frog, but later on become a threat to the Frog Prince as they secretly tried to put an end to him because he is a prince. Also, the story is highly creative and funny as the Frog Prince goes through several mishaps to become a frog again but finds out that what he really wanted was to just be with the Princess forever.

Parents should know that this book contains dark illustrations and may be too sophisticated for younger children to understand. Steve Johnson’s illustrations, while they are humorous, are also dark and sometimes scary especially of the images where the Frog Prince goes through a dark forest and since the forest contains creepy-looking trees that have dark shadows around them, it looks like a nightmarish place. The image that will probably scare some young children the most would be the image of the Frog Prince transforming into a frog-like carriage since the carriage has the Prince’s eyes all large and yellow and the Prince’s tongue takes shaped of a seat inside the carriage. The humor of this story may also be aimed at the adults since it displays the theme of a potential divorce between the Frog Prince and the Princess and many young children might not understand about the issues of many couples breaking up because of intense arguments or other difficult situations that couples sometimes do not resolve. Also, the scene where the Frog Prince worries that he will never change back into a prince may upset some young children who may also have fears about losing their parents if they get lost in a place they do not know.

“The Frog Prince Continued” is truly a classic dark comedy about how sometimes marriages do not turn out the way that we want it at first, but we eventually begin to love our loved ones more whenever the thought of losing them tortures us. Jon Scieszka’s and Steve Johnson’s collaborations have made this story an instant hit from Jon Scieszka’s fractured fairy tales collection. Of course, parents may want to read this book first before they read it to their children who are eight years old or younger due to the theme of a potential divorce and the somewhat dark illustrations.