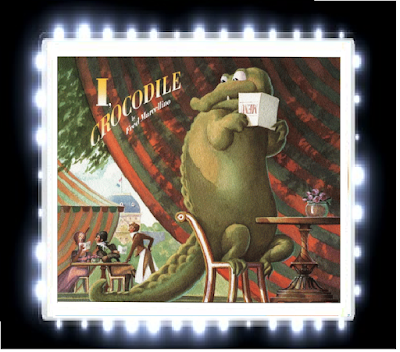 I have read many books where a story is usually told from an animal’s point of view such as Aesop’s Fables. But I have never read a book where the main animal character talks with dignity when narrating his side of the story. “I, Crocodile” is such a tale by Fred Marcellino who masterfully tells the story of a crocodile’s attempts to fit in the society who had forcefully taken him away from his home.

Fred Marcellino’s story and illustrations are brilliant as he describes the crocodile’s predicament from being taken away from his home in the Nile River to nearly becoming dinner for the French. The true highlight of this story is the crocodile himself as he is displayed as a civilized creature that had high opinions of the humans who had taken care of his ancestors but then sees the dark side of humans when they tried to eat him. Marcellino’s illustrations humorously illustrates the crocodile as a pudgy yet cute creature.

Parents should know that many young viewers may be disturbed by the ending of this book. I am not going to spoil the ending for you, but someone does get eaten at the end and that concept may disturb children. Parents may wish to discuss to their children about the crocodile’s predicament and how he resolves this towards the end of the story.

“I, Crocodile” is truly a classic book about the importance of respecting one’s privacy and feelings and the book clearly defines a cautionary tale of what happens when someone tries to forcefully take someone out of their natural home and put them in a society that they are not accustomed to. This is a great book for everyone to read, but parents should warn their children about the ending and why the book was concluded in that manner.