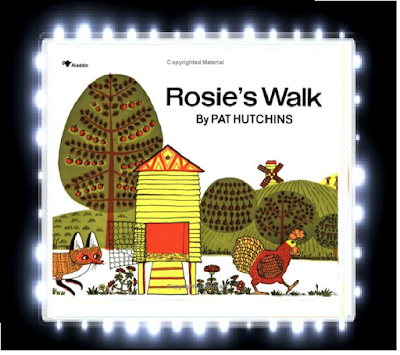 I actually first heard about this book when I was watching it on “Weston Woods” which is a children’s programming company that turns classic children’s books into ten minute long cartoon shorts.  “Rosie’s Walk” is a children’s book by Pat Hutchins and it is about the wacky adventures of Rosie the Hen and the fox that is trying to catch her.  “Rosie’s Walk” is truly a brilliant and hilarious book that many children will love for many years!

This was the first book that I have read from Pat Hutchins and I can tell you that I really enjoyed this book!  Pat Hutchins has done a great job at both illustrating and writing this book.  The best aspect of this book is that the story is extremely hilarious as Rosie keeps on walking into all kinds of things at the farm such as a rake and a haystack and the fox suffers for it as he runs into the things that Rosie goes through easily.  I love the way that Pat Hutchins portrays Rosie as a quiet hen who is unaware of the danger right behind her, which makes this book extremely light-hearted as Rosie is never actually hurt when she goes through various objects and buildings at the farm, however the fox is the one who always get hurt every time it tries to catch Rosie and I think that many children will definitely enjoy the fox’s futile efforts to catch Rosie.  Pat Hutchins’ illustrations are truly simplistic yet hilarious as you can see that most of the background objects such as the trees have geometric shapes that make this book look simple.  I love the way that Pat Hutchins illustrates the trees in oval shapes and the branches are set up all in a row of lines in the trees.  As was the trend with most picture books of the 1960s, there were mainly only six colors used in the illustrations which were red, orange, yellow, black, green, and brown, however these colors easily bring out the humorous touch to the illustrations.  Pat Hutchins illustrates Rosie as a yellow, orange and brownish hen with a calm look in her eyes despite the fox following her in every image and the fox is drawn with a large bushy tail, large black ears, and small feet, which actually makes him look more cute than scary.

“Rosie’s Walk” is a truly hilarious story that I believe many children will enjoy if they love good humor.  I would recommend this book to children ages three and up since this book is really easy for small children to read since there are only two or three words per page and there is nothing inappropriate in this book that would worry parents.