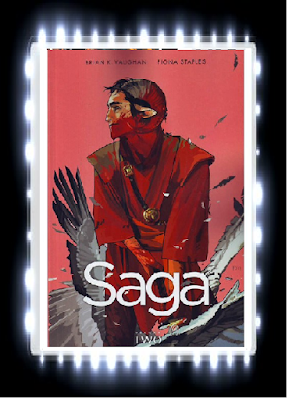 In this volume, Alana and Marko ended up getting a surprised visit from none other than Marko’s parents!  As Marko’s parents and Alana and Marko try to find another planet to land on, trouble is brewing as the freelancer, the Will, continues his mission to go after Alana and Marko, along with Marko’s ex-fiancée, Gwendolyn who aims to make Marko pay for leaving her! To make matters worse, Prince Robot IV is getting closer to finding Marko and Alana!

Can life be any tougher for these two lovebirds?

Brian K. Vaughan’s writing: Brian K. Vaughan has once again proven that he can make a brilliant story about two star-crossed lovers trying to find a new home to raise their baby in a time of war.  I loved that Brian K. Vaughan introduced Marko’s parents into this story, since I had been wondering about how both Alana and Marko’s parents would feel about their children being on the run from the government while protecting their baby.  I also enjoyed the fact that even though Marko’s parents distrusted Alana at first because she came from the planet Landfall, they started to bond with each other due to all of them wanting to protect Hazel and I found that to be extremely touching.  I also enjoyed the scenes with the Will and Gwendolyn as it was exciting to see them try to free the young girl from the first volume who was imprisoned on the planet Sextillion (yes, you heard that right).  I also loved the flashbacks briefly shown of Marko and Alana’s past lives before they had Hazel as it gave more depth into their characters.  I was impressed with the way that Brian K. Vaughan was able to balance both the action and the humor of this volume as it made the story so unique and interesting to read through and I loved the back and forth banter of Alana and Marko as it really made them stand out as a true couple!

Fiona Staples’ artwork:  Fiona Staples’ artwork as usual was brilliant to look at as the characters seem to glow right off the pages, especially during the scenes where explosions give off this bright glow off the pages.  I also loved the images of the characters themselves as they look truly bizarre (there are some creatures that look half animal and Prince Robot IV having a television set for a head) and yet, they bring a vast creativity to the story.

Just like the first volume, there is strong language in this volume that might not go over well with anyone who does not reading strong language in a story.  Also, there is some gory violence in this volume as there are images of characters being cut in half or exploding in a gush of blood.  This volume also has some really graphic imagery, mainly graphic depictions of nudity and sexual scenes, which I will admit I cringed a bit when I saw these scenes.

Overall, “Saga: Volume Two” is a truly brilliant follow up to Brian K. Vaughan’s legendary “Saga” series and now that I have finally read the second volume to this fantastic series, I am just dying to have volume three come up!