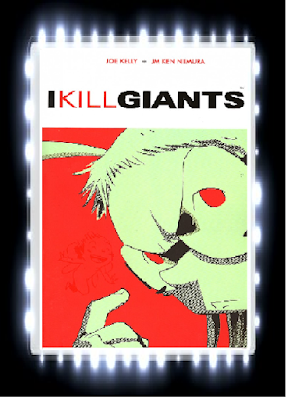 I have read so many Image Comics over time (Saga, Invincible, Chew) and I have been enjoying every one of them!  Now, I had stumbled upon this unique little comic called “I Kill Giants” which is written by Joe Kelly along with artwork by JM Ken Niimura and it was seriously one of the most creative and intense comics I had ever read!

Barbara Thorson was just your average fifth-grade student…alright maybe not so average student.  Barbara’s big secret is that she kills giants for a living, using her trusty hammer Coveleski!  Unfortunately, everyone at school thinks that she is a freak and she seems to have so many personal problems at home.  Can Barbara overcome her biggest fear that will allow her to get through life?

Joe Kelly’s writing: Wow!  I was just so blown away by Joe Kelly’s emotional yet exciting writing!  Honestly, this was the first time I had read any of Joe Kelly’s works and after reading this comic, I am definitely looking forward to reading more of his works!  Joe Kelly has done a brilliant job at tying in Barbara’s personal problems with her obsessions with giants as it really brought a true depth to the story.  I really wish I could tell you about what Barbara’s personal problems are, but that would pretty much give away the entire plot of this comic, but I will say that you will start tearing up once you hear about Barbara’s fears.  I also loved the way that Joe Kelly really delve into why Barbara has such a terrible attitude towards people and why fighting giants has become an obsession to her since even though there were times where I just wanted to yell at Barbara for acting so coldly towards other people, I can actually sympathize with her because she is dealing with a trauma that frightens her.  I also loved the mythical references to giants and fairies in this comic, even though they are not too major to the story as they added a fantasy atmosphere to the story.

JM Ken Niimura’s artwork:  JM Ken Niimura’s artwork is truly creative and unique to look at, even though there were times where the artwork was a bit scratchy and it was a bit difficult to see what the characters were actually doing in the panels. However, I really loved the way that the characters look slightly cartoonish as it lessens the dark atmosphere of the story a bit.  I also loved the black and white colorings of this comic as it really brought in a more serious tone to the story.

For anyone who does not like language in comics, this comic does have a bit of language in it, although it is not as strong as some of the more mature comics.  Also, this comic is a bit dark, especially with the scenes of Barbara trying to deal with her personal problems.

Overall, “I Kill Giants” is definitely one comic book that really surprised me!  When I looked at the title, I actually thought that this book was going to be a blood fest of the main character slaying giants, but read this comic and the story is much deeper than that and that is what I really loved about this comic!  I would HIGHLY RECOMMEND this comic book to absolutely anyone!