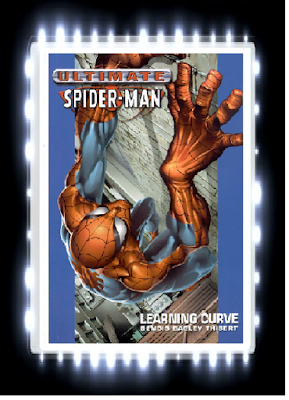 In this volume, Peter Parker is still going around town, saving innocent people from various criminals that pop up in the city.  Unfortunately, Peter will soon discover that being Spider-Man may not be all that it is cracked up to be as some of the media make him look like a menace rather than a hero and his social life seems to be dwindling.  Also, Peter has to deal with the city’s big-time crime lord, KINGPIN!

Brian Michael Bendis’ writing: Like the first volume, Brian Michael Bendis’ writing is interesting and hilarious at the same time!  I really liked the way that Brian Michael Bendis writes Peter Parker as Peter is shown as being an energetic and humorous teenager. I loved the way that Peter fires various jokes towards his enemies, which is a quality that has often made him famous with the comic fans.  I also loved seeing Peter’s growing relationship with Mary Jane as we get to see how being a superhero does affect Peter’s social life and how he is trying to decide whether or not he should tell his family and friends about who he really is.  I also loved the portrayal of Kingpin here as he is truly ruthless and even scary at times, which made him into a truly worthy foe for Spider-Man.

For anyone who does not like violence or language in a comic book, there is some language and violence in this volume, although it is not as strong as say something that comes out of “Sandman” or “Saga.”