[BOOK REVIEW] The True Story of the 3 Little Pigs! by Jon Scieszka 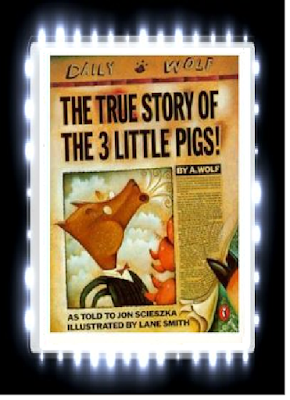 Title:  The True Story of the 3 Little Pigs!

“The True Story of the Three Little Pigs” became one of the most popular books in 1989, earning awards, including the New York Times Best Illustrated book. Also, this story is notably popular for its wit and humor as Alexander T. Wolf (Al for short) tries to explain to the reader his side of the story on what happened when he met the three little pigs.

There are so many positive aspects in this story that I would enjoy discussing, but the main positive aspects in this story are the writing and the illustrations. Jon Scieszka’s master storytelling is comical and creative as he describes the wolf’s side of the story in great detail, even giving him a name to go by. Scieszka does a great job in relating the wolf’s predicament to the viewers, so that when you read the story, you probably are feeling sorrier for the wolf then for the little pigs. Lane Smith’s illustrations are dark, yet humorous to an extent. Probably the highlights of Smith’s drawings in this book are the scenes of a giant animal hamburger presented in the beginning of the book and the somewhat menacing image of the third little pig inside his brick house as he is drawn with dark circles around his eyes and his eyes are yellow.

Parents should know that the scenes where the first and second little pig gets eaten by the wolf may be a bit disturbing to young children. Even though the scenes take place off-screen and Al reassuringly tries to tell the reader that it’s natural for wolves to eat pigs, parents may want to make sure that their children can understand the natural order of the food chain and handle the eating scenes.

“The True Story of the Three Little Pigs” is a pure classic among both adults and children and features humor that is brilliantly sarcastic and sometimes dark. Also, you rarely hear a supposed villain’s side of the story, even though in this version, Al seems like a nice guy just trying to get sugar for his sick grandmother and following wolfish instincts. I would highly recommend this book for everybody, but parents should discuss the eating scenes with their children before they read them this book.